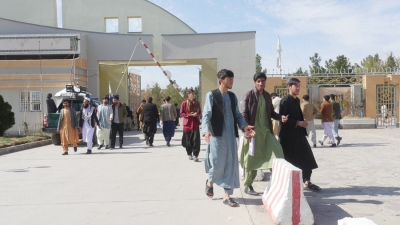 As residents of Afghanistan’s Herat province face high unemployment, skyrocketing inflation and acute hunger, the Taliban authorities have cut off their access to a local delicacy — lamb testicles, according to a media report.

Herat, Nov 12,2022:  As residents of Afghanistan’s Herat province face high unemployment, skyrocketing inflation and acute hunger, the Taliban authorities have cut off their access to a local delicacy — lamb testicles, according to a media report.

The recently-announced ban on the sale of testicles of sheep and other animals has infuriated local business owners and customers, who say the Taliban is focusing on trivial issues while avoiding more pressing problems, RFE/RL reported.

“I’m surprised that the Taliban are focusing on small issues such as banning the sale of sheep testicles. It is a really small issue. We have many bigger problems in Afghanistan, such as poverty and the closure of girls’ schools,” a Herat resident said.

The country is suffering from a major humanitarian crisis brought on by severe drought and the spread of disease, and has been identified as a “hunger hotspot” by the United Nations. The ban on the sale of animal testicles was issued verbally in September by the province’s branch of the Ministry for the Promotion of Virtue and the Prevention of Vice, which is responsible for enforcing the Taliban’s hard-line interpretation of Islamic Shari’a law.

The head of the ministry’s department in Herat, Azizul Rahman Mohajer, said the decision was based on a decree issued by Islamic religious scholars who forbade the eating of animal testicles as a “prohibited abomination”.

Sheep testicles, often prepared as kebabs known locally as ‘kalpura’, are not a staple food but a delicacy that is believed to improve virility in men, RFE/RL reported.

According to the Herat Butchers’ Union, lamb testicles had been supplied to more than 1,500 local butcher shops prior to the ban. But the butchers have now been forced to throw them away. The new restrictions have harmed local businesses and taken away livelihoods in a province already suffering from economic hardships and job losses since the Taliban returned to power in August last year.

Herat has enforced another obscure ban that has apparently not been introduced nationwide.

In October, Taliban authorities in the province banned hookahs, or ‘shisha’, saying the popular tobacco-smoking pastime is banned under Islam. Local barbers have also reportedly stopped trimming beards out of fears that doing so might anger the Taliban.

The Herat resident quoted above said that locals are suffering, and that the Taliban have failed to address real problems associated with the country’s political and economic turmoil, RFE/RL reported.

“It is very important that the Taliban focus on these issues, not on matters like people’s hair, beard, or even sheep testicles,” he said.