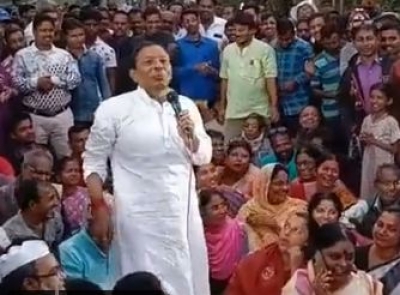 BJP MLA Kusumu Tete said, “As a tribal MLA, I strongly condemn such remarks by Bengal Minister Akhil Giri. I request West Bengal Chief Minister Mamata Banerjee to immediately expel such a psycho person and arrest him as he has made derogatory remarks on the first citizen of India.”

She further said no one has the right to make such remarks on the President of India. Tete also lodged a complaint.

Senior BJD leader and Rajya Sabha MP, Munna Khan, too strongly condemned the statement of the Bengal Minister. “No one has the right to make such remarks on the President. We strongly condemn it. Giri has no moral right to continue as a minister. Strong action should be taken against him,” said Khan.

Congress legislators Taraprasad Bahinipati and Suresh Routray too demanded action against Akhil Giri for insulting the highest chair in the Indian constitution.

The minister should immediately resign from his position and he should be put behind bars. The West Bengal CM should apologise to the people for the derogatory remark made by his minister, said Bahinipati.

Akhil Giri, West Bengal Minister of State for Correctional Home, recently made comments against President Murmu. “We don’t judge anyone by their appearance. We respect the office of the President. But, how does our President look,” he commented at a public programme at Nandigram in East Midnapore district.