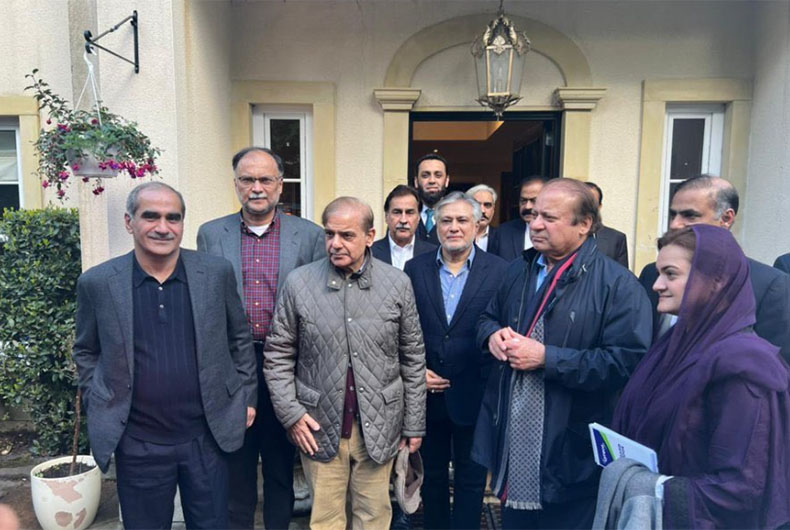 London: There was more to the high level meeting of leaders of the Pakistan Muslim League-Nawaz (PML-N) in London than met the eye, informed sources indicated.

On the face of it, the economic crisis gripping Pakistan, whether or not to call early elections, and how to tackle the challenge posed by a populist Imran Khan were on the agenda during the two-day conference with former Prime Minister and leader of the PML-N Nawaz Sharif, who is exiled in the British capital.

However, observers claimed tensions among senior figures in the party was equally pertinent. It is said there is a general acceptance of Nawaz Sharif as the undisputed leader, but not his brother Shehbaz Sharif, who is now Prime Minister.

While the latter is deemed to have been relatively successful as Chief Minister of Punjab, his alleged style of decision-making without prior consultation is reportedly not ideal at the federal level. Nationally, PML-N has powerful figures in former Prime Minister Shahid Abbasi, Ahsan Iqbal, and Khawaja Asif.

The party leadership is split on early elections. One section feels it would be blamed for a deterioration in the economic situation, which is feared before a turnaround. Tough conditions attached to any bailout by the International Monetary Fund (IMF) could also inflict short-term pain on the people. This group thinks accusing Imran Khan of mismanagement in a snap election would win the PML-N alliance, now in office, a majority.

Nawaz Sharif is believed to be of this view and a final decision has, it seems, been left to him.

A participant in the parleys was former Finance Minister of Pakistan, Ishaq Dar, who presented his ideas on economic options. The lack of clarity on the IMF package and any assistance Saudi Arabia and the United Arab Emirates may extend has caused the Pakistani rupee to weaken against the US dollar.

However, the co-chairman of a key coalition partner Pakistan People’s Party, Asif Zardari, is opposed to elections before reforms of election and National Accountability laws in the country.

“Whether it takes three or four months, we have to work on implementation of policies and improving the electoral process,” he told a press conference in Pakistan.

“I have also talked to Nawaz Sharif on this and we agreed that we can go to polls as soon as the reforms and targets are met.”

The choice of Zardari’s son Bilawal as the Pakistan Foreign Minister has apparently been well received. The Oxford-educated 33-year-old’s humility has impressed career diplomats. He is scheduled to travel to the US next week to attend a Global Food Security meeting in New York at the personal invitation of Secretary of State Antony Blinken.

Resumption of US economic aid to Islamabad which would depend on reciprocal cooperation on Afghanistan and containment of extremism is crucial to Pakistan’s recovery.

“The foreign minister (during a meeting with the American charge d’ affaires) invited US companies to come and invest in Pakistan.”

“With the US, there is a shared desire for further strengthening and enhancing of mutually beneficial bilateral relations as manifested by recent and ongoing contacts.”

Imran Khan’s continuing popularity is not only a headache for the current ruling parties, but also for the top brass of the Pakistan Army, who created him and have now chosen to be “neutral” which could mean they are actually attempting to cut him to size.

The former Pakistan cricket captain enjoys a significant following among overseas Pakistanis in Britain. At home it is primarily an urban phenomenon, with Karachi possibly topping the list in supporting him.

Worryingly for the army generals, a majority in the middle and lower ranks below them are behind Imran Khan, as are overwhelmingly serving officers and men in the air force and the navy and retired personnel. To turn this around is a Herculean task for even the omnipotent army.

On Friday, Imran Khan, calling the army “neutrals”, reminded it that his Finance Minister Shaukat Tarin had warned the economy would go into a “tailspin” if his government was ousted, which, of course, it legitimately was on the floor of Pakistan’s National Assembly.

Punitive action against Imran Khan, even if ordered by the judiciary, could be seen by the Pakistani public as vengeful and might backfire.

Thus, the PML-N is in a dilemma.