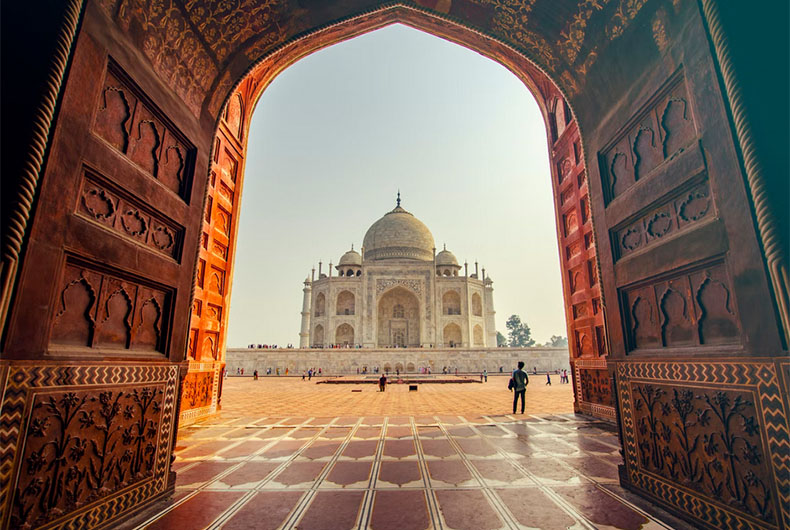 The theory that the Taj Mahal was built on a Hindu temple, or was a ‘Hindu monument’ as claimed by the revisionist historian P.N. Oak, is resurrected by right-wing groups at regular intervals

New Delhi: By asserting the Jaipur royal family’s original ownership of the land on which the Taj Mahal stands, Diya Kumari, grand-daughter of Man Singh II, the last Maharaja of Jaipur, and BJP MP from Rajsamand, Rajasthan, has unwittingly laid to rest the debate over whether the world’s most famous monument to love was built on a Hindu temple.

The theory that the Taj Mahal was built on a Hindu temple, or was a ‘Hindu monument’ as claimed by the revisionist historian P.N. Oak, is resurrected by right-wing groups at regular intervals, most recently in a petition that has just been spiked by the Allahabad High Court.

Taj Mahal was built on land that originally belonged to Mirza Raja Man Singh, the Raja of Amber (latter-day Jaipur) and Emperor Akbar’s general who was best known for leading the Mughal army against Maharana Pratap in the Battle of Haldighati, for his conquests of Bengal, Bihar and Odisha, where he was later posted as governor, and for restoring Puri’s Jagannath Temple.

He was succeeded by his second son, Bhau Singh, and it was Emperor Jahangir’s intervention that ensured he inherited the mantle and not his elder brother, who did not inspire much confidence in their Mughal overlord.

Bhau Singh, who didn’t quite match up to the high standards set by his father, died at the age of 44 without a son and heir, so Amber passed into the hands of his grand nephew, Jai Singh I.

By virtue of the office he held, Jai Singh I was also the owner of the land on the banks of the Yamuna that the architects of Taj Mahal fancied for the monument envisioned by Emperor Shahjahan. In the tradition of Amber, Jai Singh I served as an army commander of Shahjahan, who honoured him with the title of Mirza Raja.

Jai Singh I and Shah Jahan were very close to each other — they fought in military campaigns together in Kandahar, Balkh and Badakshan in Afghanistan and Central Asia. They seized the strategic fort of Kandahar, an outpost of Safavid Persia, which pitted the Mughals against their old ally and a mighty military power.

The Safavids under Shah Abbas II regained control over Kandahar and the Mughals failed to get it back, even after two military expeditions to recover it — one led by Aurangzeb and other by Dara Shukoh, Shahjahan’s oldest and favourite son. Jai Singh I was a part of both. He got close to Aurangzeb and fell out with Dara Shukoh, who treated him very badly after Kandahar didn’t fall into the hands of the Mughals.

Jai Singh I, clearly, was a loyal general and a friend of the ruling dispensation, in the tradition of Bhagwant Das, who became Akbar’s brother-in-law and established the unshakeable ties between the House of Amber and the Mughals.

So, it was to be expected that when Shahjahan, after Mumtaz Mahal’s death in 1631, approached Jai Singh I for his tract of land to build the Rauza-e-Munnavara, or the Illuminated Tomb, as the Taj Mahal was then known, he would have happily acquiesced (apart from agreeing to supply the Makrana marbles with which the mausoleum was built).

Jai Singh I, who was born in 1611, was then only 20 years old, but he had already become a favourite of the emperor after quelling a rebellion by Afghan chieftains loyal to Shahjahan’s general in the Deccan, Khan Jahan Lodi.

Coming back to whether there was a temple standing on the land that Jai Singh I owned, it is clear from contemporary records (the Mughals, incidentally, were meticulous with their paperwork), and the accounts left behind by historians who lived and wrote during the reign of Shahjahan, that none existed.

The Amber ruler, as the historian Rana Safvi points out, had a riverfront haveli standing on the land he gave to Shahjahan. He was in the company of other leading Mughal noblemen who had mansions on the banks of the Yamuna, such as Mahabat Khan, Asaf Khan, Muqim Khan and even Dara Shukoh, who was killed and prevented from becoming the emperor by Aurangzeb.

Writing in the ‘Padshah Nama’, the contemporary chronicler, Abdul Hamid Lahori says that though Jai Singh I wanted to give the land for free as a gesture of friendship to the king, but Shahjahan insisted on gifting him mansions situated on the crown land in return. The exchange was announced in a royal ‘farman’ (edict) issued on December 28, 1633.

The ‘farman’, cited by Safvi, has been reproduced with a translation In W.E. Begley and Z.A. Desai’s ‘Taj Mahal: The Illumined Tomb’, an anthology of 17th-century Mughal and European documents related to the mausoleum. Not once does it mention anything other than a haveli being present on the land where Taj Mahal stands today.

Jai Singh I, incidentally, also owned the land on which the much-revered Gurudwara Bangla Sahib in New Delhi stands. The ‘Bangla’ in Bangla Sahib refers to Jai Singh I’s bungalow (‘bangla’), where the Sikh Guru Har Krishan stayed as the Amber ruler’s house guest in 1664 and served people stricken by the cholera and smallpox epidemics then raging in the city.

New Delhi’s prestigious shopping district, Connaught Place, is also located on land that belonged to Jai Singh I. In his time, the area was called Jaisinghpura in his honour.

previousPakistan: The Dilemma of PML-N

nextWatch: First ever direct image of black hole in centre of Milky Way