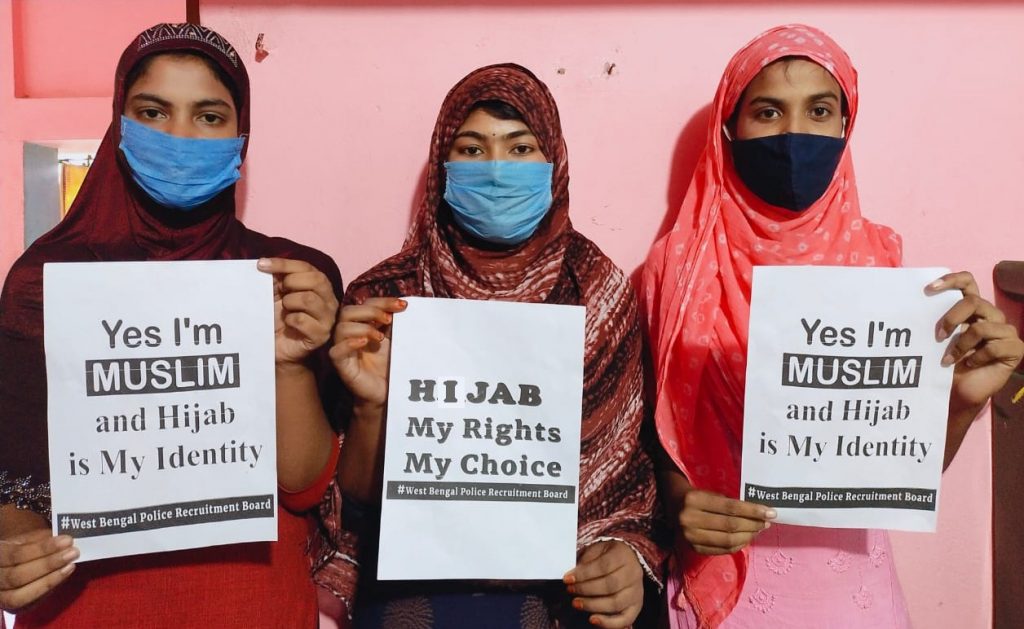 “It is made clear that the result of the recruitment process so far as the petitioner is concerned, shall abide by the result of this writ petition,” Live Law quoted Justice Arindam Mukherjee as saying.

“The petitioners question the rejection of their candidature for having applied with their respective photographs with headgear (hijab) as part of their religious practice when the face in the photograph is clear for necessary identification,” the judge noted.

Denying 30,000 plus applicants admit cards for the preliminary examination to recruit constables, the West Bengal Police Recruitment Board had conducted the exam on 26 September this year. After issuing admit cards on 6 September, several applications were found rejected for uploading photos with headscarves and for other mistakes while filling the form.  Out of the rejected 30,000, around 1000 forms were that of Muslim girls, solely dismissed for wearing headscarves in the photos attached with the forms.

The Calcutta High Court was dealing with a writ petition filed by a group of Muslim women, whose application forms for recruitment had been rejected by the Recruitment Board since they were clad in a ‘hijab’ in the photograph submitted.

“Hijab is my idenity“

The WBPRM guidelines 2020 clearly stated that the applicants’ faces should not be covered in any way in the photos.

“Applicants are advised not to upload images of other objects in place of photograph and signature. The photograph with face/head covering, sunglass/tinted glasses covering the eyes will not be accepted. Photographs cropped from ‘groupies’ or ‘selfies’ shall also be disallowed during the scrutiny,” WBPRM guidelines 2020 reads.

But when it checked out the guidelines of 2019, there was no mention of face/head covering being unacceptable, which seemed uncanny because this is a recently installed rule.

“Applicants are required to upload a scanned copy of their recent passport size photograph (Preferably coloured) and full signature in JPG format covering the entire space provided for the same. The photograph must be on white background, with 75-80% of the photo occupying the applicant’s face. Applicants are advised not to upload images of other objects in place of photograph and signature,” WBPRM guidelines 2019 read.

Tuhina Khatoon, one of the rejected applicants from Murshidabad, had visited the office of West Bengal Police in Biddhanagar to know why her application went dismissed. “I talked to one of the officers and asked him to look at the form, and he told me I was rejected for my headscarf. I reminded him that I am a Muslim and that it’s my fundamental right to follow my religion as the constitution allows me to do so. But he kept on repeating how it is a compulsory rule,” Khatoon said to Maktoob reporter last month.

“I don’t get it as to why they have such a rule for headscarves even when knowing the fact that Muslim women wear so. They have accepted the applications of Sikh men who wear turbans but not us. If they’re following the rule, then why is there an exception for them, alone?” Khatoon had raised her concerns.

She also told that how the officer said they can do whatever they want, even go to the supreme court, but no one will listen to their plight.

After failed attempts to get her application accepted, Khatoon said, “We were rushed out of the gate, and another officer threatened that if we don’t leave immediately, not only will we be arrested and but also our careers ruined.”

In a letter to the West Bengal Police Recruitment Board chairperson in connection with the rejection of application forms, the West Bengal unit of Students Islamic Organisation of India (SIO) had said it is Muslim women’s right to wear hijab and this must not be treated as a reason for rejection of their forms.

previousAround web: Thousands of farmers gather to mark one year of historic protests