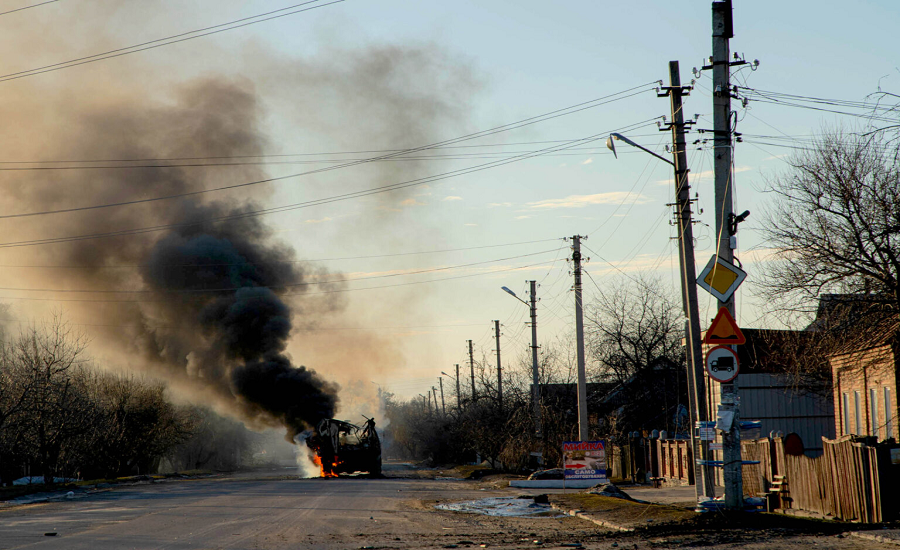 Americans have been shocked by the death and destruction of Russia’s invasion of Ukraine, filling our screens with bombed buildings and dead bodies lying in the street. But the United States and its allies have waged war in country after country for decades, carving swathes of destruction through cities, towns and villages on a far greater scale than has so far disfigured Ukraine.

AS we recently reported, the US and its allies have dropped over 337,000 bombs and missiles, or 46 per day, on nine countries since 2001 alone. Senior US Defense Intelligence Agency officers told Newsweek that the first 24 days of Russia’s bombing of Ukraine was less destructive than the first day of US bombing in Iraq in 2003.

The US-led campaign against ISIS in Iraq and Syria bombarded those countries with over 120,000 bombs and missiles, the heaviest bombing anywhere in decades. US military officers told Amnesty International that the US assault on Raqqa in Syria was also the heaviest artillery bombardment since the Vietnam War.

Mosul in Iraq was the largest city that the United States and its allies reduced to rubble in that campaign, with a pre-assault population of 1.5 million. About 138,000 houses were damaged or destroyed by bombing and artillery, and an Iraqi Kurdish intelligence report counted at least 40,000 civilians killed.

Raqqa, which had a population of 300,000, was gutted even more. A UN assessment mission reported that 70-80% of buildings were destroyed or damaged. Syrian and Kurdish forces in Raqqa reported counting 4,118 civilian bodies. Many more deaths remain uncounted in the rubble of Mosul and Raqqa. Without comprehensive mortality surveys, we may never know what fraction of the actual death toll these numbers represent.

The Pentagon promised to review its policies on civilian casualties in the wake of these massacres, and commissioned the Rand Corporation to conduct a study titled, “Understanding Civilian Harm in Raqqa and Its Implications For Future Conflicts,” which has now been made public.

Even as the world recoils from the shocking violence in Ukraine, the premise of the Rand Corp study is that US forces will continue to wage wars that involve devastating bombardments of cities and populated areas, and that they must therefore try to understand how they can do so without killing quite so many civilians.

The study runs over 100 pages, but it never comes to grips with the central problem, which is the inevitably devastating and deadly impacts of firing explosive weapons into inhabited urban areas like Mosul in Iraq, Raqqa in Syria, Mariupol in Ukraine, Sanaa in Yemen or Gaza in Palestine.

The development of “precision weapons” has demonstrably failed to prevent these massacres. The United States unveiled its new “smart bombs” during the First Gulf War in 1990-1991. But they in fact comprised only 7% of the 88,000 tons of bombs it dropped on Iraq, reducing “a rather highly urbanized and mechanized society” to “a pre-industrial age nation” according to a UN survey.

Instead of publishing actual data on the accuracy of these weapons, the Pentagon has maintained a sophisticated propaganda campaign to convey the impression that they are 100% accurate and can strike a target like a house or apartment building without harming civilians in the surrounding area.

However, during the US invasion of Iraq in 2003, Rob Hewson, the editor of an arms trade journal that reviews the performance of air-launched weapons, estimated that 20 to 25% of US “precision” weapons missed their targets.

Even when they do hit their target, these weapons do not perform like space weapons in a video game. The most commonly used bombs in the US arsenal are 500 lb bombs, with an explosive charge of 89 kilos of Tritonal. According to UN safety data, the blast alone from that explosive charge is 100% lethal up to a radius of 10 meters, and will break every window within 100 meters.

That is just the blast effect. Deaths and horrific injuries are also caused by collapsing buildings and flying shrapnel and debris – concrete, metal, glass, wood etc.

US officials draw a moral distinction between this “unintentional” killing and the “deliberate” killing of civilians by terrorists. But the late historian Howard Zinn challenged this distinction in a letter to the New York Times in 2007. He wrote,

“These words are misleading because they assume an action is either ‘deliberate’ or ‘unintentional.’ There is something in between, for which the word is ‘inevitable.’ If you engage in an action, like aerial bombing, in which you cannot possibly distinguish between combatants and civilians (as a former Air Force bombardier, I will attest to that), the deaths of civilians are inevitable, even if not ‘intentional.’

Does that difference exonerate you morally? The terrorism of the suicide bomber and the terrorism of aerial bombardment are indeed morally equivalent. To say otherwise (as either side might) is to give one moral superiority over the other, and thus serve to perpetuate the horrors of our time.”

Americans are rightfully horrified when they see civilians killed by Russian bombardment in Ukraine, but they are generally not quite so horrified, and more likely to accept official justifications, when they hear that civilians are killed by US forces or American weapons in Iraq, Syria, Yemen or Gaza. The Western corporate media play a key role in this, by showing us corpses in Ukraine and the wails of their loved ones, but shielding us from equally disturbing images of people killed by US or allied forces.

While Western leaders are demanding that Russia be held accountable for war crimes, they have raised no such clamor to prosecute US officials. Yet during the US military occupation of Iraq, both the International Committee of the Red Cross (ICRC) and the UN Assistance Mission to Iraq (UNAMI) documented persistent and systematic violations of the Geneva Conventions by US forces, including of the 1949 Fourth Geneva Convention that protects civilians from the impacts of war and military occupation.

The International Committee of the Red Cross (ICRC) and human rights groups documented systematic abuse and torture of prisoners in Iraq and Afghanistan, including cases in which US troops tortured prisoners to death.

Although torture was approved by US officials all the way up to the White House, no officer above the rank of major was ever held accountable for a torture death in Afghanistan or Iraq. The harshest punishment handed down for torturing a prisoner to death was a five-month jail sentence, although that is a capital offense under the US War Crimes Act.

In a 2007 human rights report that described widespread killing of civilians by US occupation forces, UNAMI wrote, “Customary international humanitarian law demands that, as much as possible, military objectives must not be located within areas densely populated by civilians. The presence of individual combatants among a great number of civilians does not alter the civilian character of an area.”

The report demanded “that all credible allegations of unlawful killings be thoroughly, promptly and impartially investigated, and appropriate action taken against military personnel found to have used excessive or indiscriminate force.”

Instead of investigating, the US has actively covered up its war crimes. A tragic example is the 2019 massacre in the Syrian town of Baghuz, where a special US military operations unit dropped massive bombs on a group of mainly women and children, killing about 70. The military not only failed to acknowledge the botched attack but even bulldozed the blast site to cover it up. Only after a New York Times exposé years later did the military even admit that the strike took place.

So it is ironic to hear President Biden call for President Putin to face a war crimes trial, when the United States covers up its own crimes, fails to hold its own senior officials accountable for war crimes and still rejects the jurisdiction of the International Criminal Court (ICC). In 2020, Donald Trump went so far as to impose US sanctions on the most senior ICC prosecutors for investigating US war crimes in Afghanistan.

The Rand study repeatedly claims that US forces have “a deeply ingrained commitment to the law of war.” But the destruction of Mosul, Raqqa and other cities and the history of US disdain for the UN Charter, the Geneva Conventions and international courts tell a very different story.

We agree with the Rand report’s conclusion that, “DoD’s weak institutional learning for civilian harm issues meant that past lessons went unheeded, increasing the risks to civilians in Raqqa.” However, we take issue with the study’s failure to recognize that many of the glaring contradictions it documents are consequences of the fundamentally criminal nature of this entire operation, under the Fourth Geneva Convention and the existing laws of war.

We reject the whole premise of this study, that US forces should continue to conduct urban bombardments that inevitably kill thousands of civilians, and must therefore learn from this experience so that they will kill and maim fewer civilians the next time they destroy a city like Raqqa or Mosul.

The ugly truth behind these US massacres is that the impunity senior US military and civilian officials have enjoyed for past war crimes encouraged them to believe they could get away with bombing cities in Iraq and Syria to rubble, inevitably killing tens of thousands of civilians.

They have so far been proven right, but US contempt for international law and the failure of the global community to hold the United States to account are destroying the very “rules-based order” of international law that US and Western leaders claim to cherish.

As we call urgently for a ceasefire, for peace and for accountability for war crimes in Ukraine, we should say “Never Again!” to the bombardment of cities and civilian areas, whether they are in Syria, Ukraine, Yemen, Iran or anywhere else, and whether the aggressor is Russia, the United States, Israel or Saudi Arabia.

And we should never forget that the supreme war crime is war itself, the crime of aggression, because, as the judges declared at Nuremberg, it “contains within itself the accumulated evil of the whole.” It is easy to point fingers at others, but we will not stop war until we force our own leaders to live up to the principle spelled out by Supreme Court Justice and Nuremberg prosecutor Robert Jackson:

“If certain acts in violation of treaties are crimes, they are crimes whether the United States does them or whether Germany does them, and we are not prepared to lay down a rule of criminal conduct against others which we would not be willing to have invoked against us.”

nextClashes in Sweden Over Burning Copies of the Holy Quran