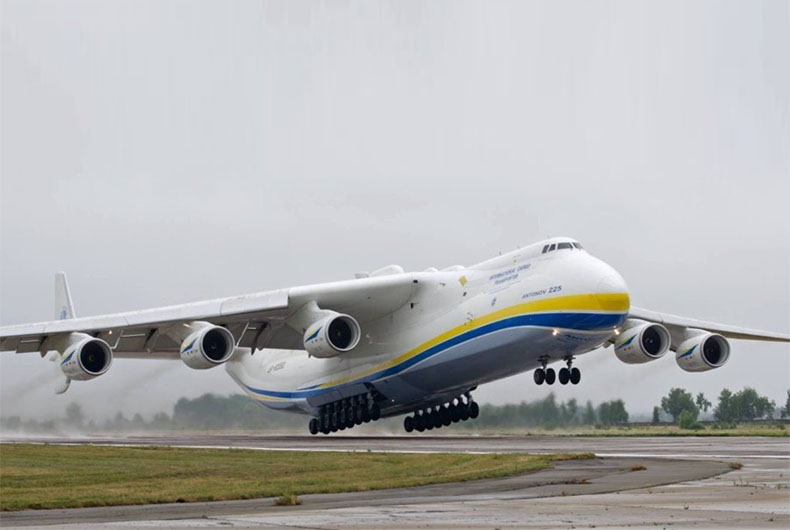 The aircraft was destroyed in an attack by Russian troops on the Hostomel airport outside Kiev, Ukroboronprom added on Sunday

The aircraft was destroyed in an attack by Russian troops on the Hostomel airport outside Kiev, Ukroboronprom added on Sunday.

The restoration of the plane will cost more than $3 billion and will take a long time, it said.

The An-225 Mriya, designed in the 1980s, is the longest and the heaviest airplane ever built. It was capable of carrying up to 640 tons of cargo, Xinhua news agency reported.

Russia started invasion of Ukraine on Thursday. More than 72 hours after the start of the all-out invasion, Russia has failed to inflict a quick defeat to Ukraine’s armed forces or gain a foothold in any of the country’s key cities, media reports said.

As of February 27, all the biggest cities – Kyiv, Kharkiv, Lviv, Dnipro, Odessa, Mykolaiv, Mariupol, Kherson – are still under full Ukrainian control, despite Russia’s massive and costly effort to seize or isolate them, Kyiv Independent reported.

If Russia aimed to take the Ukrainian capital in a shock and awe operation, it failed, the report said.

The situation tends towards hard, dragged-out war rather than a demoralizing blitz run the Kremlin likely counted on, judging from their immediate rush toward Kyiv, the report added.

Upon Ukrainian estimates, the Russian forces have employed in combat nearly 50 per cent of its combined Russian-Belarusian military force of over 150,000 troops.

After days of fierce fighting, the Russian forces still failed to enter Kyiv via two key axes in the northwest (via the cities of Bucha, Hostomel, and Irpin) and the north via the Obolon district. Multiple attempts to break Ukrainian defences have failed as of early February 27, although the streets of Kyiv have seen fierce clashes with small Russian sabotage groups infiltrating the city.

As of early February 27, Russia has also failed to establish control of three key airfields near Kyiv: Hostomel in the northwest, the Kyiv airport in the city, and Vasylkiv in the south, despite extremely fierce efforts to ensure a safe landing ground for its airborne groups, Kyiv Independent reported.

Fierce and effective Ukrainian resistance seen elsewhere has seriously slowed the Russian military down, and in many locations engaged exhausting confined warfare.

After the first 48 hours of advancement, the Russian military started indicating poor coordination and planning, as well as troublesome fuel supply, the report said.

Massive missile strikes and all-out advances decisively failed to demoralise the Ukrainian military in the first hours of the attack or strip it of effective air defence, which has also demonstrated surprisingly high effectiveness since the very start. “Moving and taking small towns and automobile communications remain the occupying power’s foremost tactics,” the Ukrainian General Staff asserted.

“Thanks to massive civilian and military resistance, attempts the take the large cities have failed. The enemy’s main goal, which is to block Kyiv, remains unsuccessful.”

The report said Russia’s hostilities feature massive civilian harm, including via massive indiscriminate use of multiple launch missile systems like BM-21 Grad in numerous locations, from Kharkiv Oblast’s Okhtyrka to Mariupol, the northern suburbs of which were desolated in Russian missile attacks.