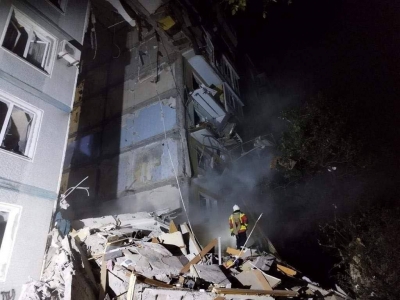 Ukrainian authorities have set up 3,720 emergency shelters across the country after a latest barrage of Russian missile strikes caused widespread electricity outage across the war-torn nation, a top official said here.

Kiev, Nov 25,2022:  Ukrainian authorities have set up 3,720 emergency shelters across the country after a latest barrage of Russian missile strikes caused widespread electricity outage across the war-torn nation, a top official said here.

About 70 per cent of households in Kiev did not have electricity access as of Thursday, the capital city’s Mayor Vitali Klitschko said.

On Wednesday, Russia carried out the fresh missile strikes against Ukraine, resulting in 10 deaths, according to authorities in Kiev.

The attack disconnected the country’s all four operating nuclear power plants and other major power facilities from the grid and triggered massive outages.

The continued Russian attacks have damaged almost half of Ukraine’s energy system and millions of people are without power as temperatures drop for winter.

Blackouts, both scheduled and unscheduled, have become common in many parts of Ukraine, as Russia aims regular waves of missile attacks at parts of the energy infrastructure.

At least seven people were killed and more than 20 million others were left without electricity on November 8 when Russia carried out over a 100 missile strikes in what is believed to be Moscow’s biggest wave of missile strikes since the invasion began on February 24.