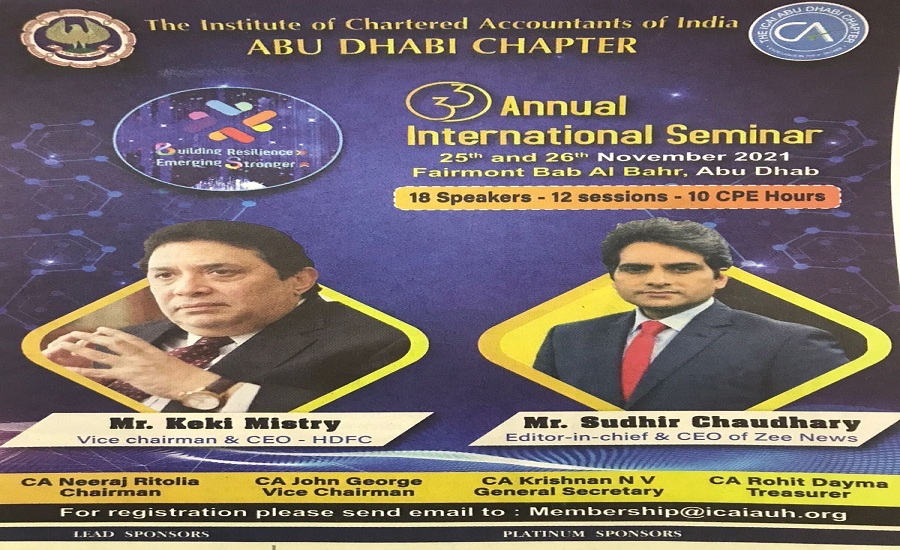 NEW DELHI – Zee News Editor-in-Chief and anchor Sudhir Chaudhry continues to be listed as one of the speakers at the event being organized by the Institute of Chartered Accountants of India (ICAI) in Abu Dhabi. This is despite a UAE minister refusing to attend the event.

Princess Hend bint Faisal Al Qasmi, who earlier informed through a tweet that Chaudhry was dropped from the event, on Wednesday said that the president of ICAI’s Abu Dhabi chapter, CA Neeraj Ritolia, has refused to drop Chaudhry from the event.

Posting the photo of Ritolia, she tweeted: “I just spoke to the President of the Abu Dhabi Chartered Accountants and he told me that #Islamophobe Sudhir Chaudhry is still attending. He refuses to disinvite him. Good to know how much he RESPECTS the country of Tolerance”.

In another tweet, she shamed Ritolia to invite him “despite the 30 members asking for the removal of a criminal #SudhirChaudhry with financial misconduct and a notorious name against Muslims”.

Earlier on Sunday, members of ICAI’s Abu Dhabi chapter wrote to the chairman and the management committee expressing their disappointment and disagreement over the invitation to Chaudhry.

The signatories to the letter have cited the Zee News editor’s ‘criminal misdeeds’. “No doubt that Sudhir Chaudhary is a popular TV personality but he has been alleged to have involved in numerous unprofessional journalism and criminal misdeeds,” they have written.

Chaudhry has been invited as a speaker at the annual international seminar of ICAI going to be held at Hotel Fairmont Bab Al Bahr on 25th and 26th November.

The princes, who has been relentlessly raising voice against invitation to Chaudhry, has also informed that UAE Minister of State for Foreign Trade Dr. Thani bin Ahmed Al Zeyoudi, who was invited to ICAI’s event, has declined to attend the event.

According to reports, the ICAI members tried to convince the management committee but they refused to disinvite because they had political pressure to keep Chaudhry as speaker. The management also assured the dissenting members that Chaudhry will not be given much publicity and advertise him at low-level. They would also ask Chaudhry not to speak about politics and anything controversial.

On the other hand, the Princess has continued to speak against Chaudhry and his invitation to the Abu Dhabi event. In a series of tweets, she highlighted allegations of extortions levelled against him and his imprisonment in the case. She shared the report of Chaudhary being sent to Tihar jail.

She also shared the video of a sting operation in which Chaudhry was accused of taking bribes.

“Watch this video on how a criminal asking for a bribe then goes to Tihar prison then gets invited by ‘accountants’ on how to be good,” she tweeted along with the video.

nextHatred More in North India Than in South: Arshad Madani