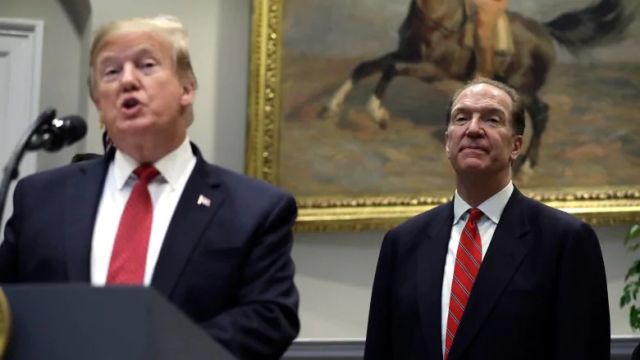 Washington : US President Donald Trump on Wednesday announced that he has chosen David Malpass, undersecretary for international affairs at the US Treasury Department, as the US candidate for the next president of the World Bank.

Calling Malpass a “very extraordinary man,” Trump said in a statement at the White House that he launched a “broad search for replacement” for Jim Yong Kim, the former World Bank chief who abruptly resigned in early January and stepped down on Friday.

“I knew that David is the right person to take this incredibly important job,” Trump added, reports Xinhua news agency.

The president said that Malpass “has been a strong advocate for accountability at the World Bank,” and that “he has fought to ensure financing is focused on the places and projects that truly need assistance, including people living in extreme poverty.”

Malpass will have to be approved by the World Bank’s board of executive directors to lead the international development lender.

Following Trump’s remarks, Malpass, who has criticised the World Bank before, thanked the president for selecting him to lead “the world’s premier development institution.”

Highlighting the $13 billion capital increase and other reforms that the World Bank shareholders endorsed in April 2018, Malpass said, “With shareholders and dedicated staff, there is a great opportunity now to implement these constructive reforms that will lead to faster growth and greater prosperity.”

Candidates picked by Washington, the World Bank’s largest shareholder with 16 per cent of its voting power, have all ended up assuming the leadership post since the institution’s inception in 1944.

This long-held tradition has put the credibility of the organisation into question, given that emerging markets’ and developing economies’ total contributions to global economic growth have far outweighed those of the advanced economies in recent years.

Kim faced challenges from nominees from Colombia and Nigeria in the 2012 race.

Malpass’s skepticism about the role of the bank and multilateralism has raised concerns within the international development community over his merit, as the World Bank said in a statement in January that the candidates for president should have “a firm commitment to and appreciation for multilateral cooperation.”

Responding to those concerns, a senior Trump administration official said that Malpass, in his capacity as Treasury undersecretary for international affairs, have engaged consructively in a number of multilateral settings worldwide.

“I think it’s fair to say that David has been quite constructive in helping to reform and be effective in the existing multilateral order,” the official added.