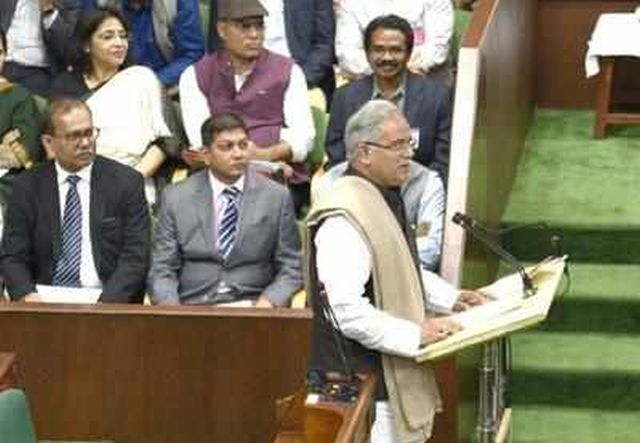 Raipur : Chhattisgarh Chief Minister Bhupesh Baghel on Friday presented a Rs 91,542-crore budget for the financial year 2019-20 in the state Assembly, saying the budget is aimed at welfare of all.

Presenting his government’s first budget, Baghel said: “I am presenting this budget with an intent of ‘welfare of all’ and want to assure that will use every penny collected from people’s hard-earned money through taxes for their welfare only.”

“As part of the paddy production promotion plan, the government proposes to allocate Rs 5,000 crore for purchasing the grain from farmers at a price of Rs 2,500 per quintal. The government had decided to waive short-term farm loans, whether it was taken from rural and cooperative banks, or commercial banks in the public sector. Rs 5,000 crore has been proposed for the purpose,” Baghel said.

“Under the ‘Mukhyamantri Khadyan Sahayata Yojana’ (foodgrain assistance scheme), the government has earmarked an amount of Rs 4,000 crore to provide 35 kg rice at subsidised price on every ration card,” he added

The budget also proposes to provide 50 per cent rebate to people on domestic use of electricity…it will come into effect from March 1. This will cost the exchequer an amount of Rs 400 crore,” Baghel added.

The first-time Chief Minister said: “With a fund of Rs 182 crore, an effort has been made to increase the ‘Legislators’ Fund’ to Rs 2 crore from the existing Rs 1 crore.”

An allocation of Rs 45.48 crore has been proposed in the budget for payment as Response Allowance to police officials — Constable to Inspector rank, he added.

Chief Minister also proposed to establish five new Food Parks to boost agricultural production in the state. Rs 50 crore has been earmarked in the budget for the purpose.

“Students from Scheduled Castes/Tribes, Other Backward Castes living in hostel and shelter homes will be entitled to get scholarship of Rs 1,000 every month at pre-matriculate level. Earlier the amount was Rs 900. Similarly, post-matriculate students of related categories will get Rs 700 per month as food allowance which was earlier Rs 500. The scheme will be implemented at a cost of Rs 27.57 crore,” he said.

Moreover, the mid-day meal kitchens will get Rs 1,500 instead of Rs 1,200 every month for their services. The budget has a Rs 26.59 crore provision for this.

The Chief Minister also said: “The compensation amount for the people affected by wild animals has been increased to Rs 6 lakh, which was earlier Rs 2 lakh.”

previousModi to flag off Train 18 on Feb 15