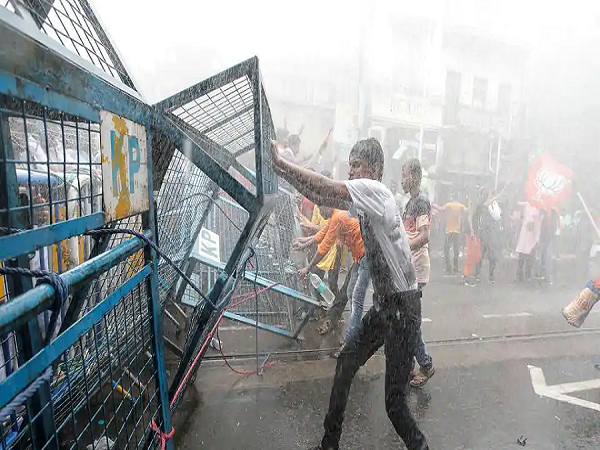 While violent incidents in West Bengal are more political in nature, in Bihar, they often have caste overtones

WHILE not a single person had died during the recent Assembly elections in Bihar, notorious for a high crime rate, the neighbouring poll-bound state, West Bengal, remains in the news for political violence for which all the parties are responsible.

In Bihar, repolling was not ordered in a single booth and no casualty was reported in the battle of ballots. Even in the 2015 Assembly elections, no such incident took place in the state. The Grand Alliance of the Rashtriya Janata Dal, the Janata Dal (United) and the Congress won the elections with a thumping majority. The 2019 Lok Sabha polls in Bihar, too, passed off peacefully. All this had happened in the state where political violence was a common phenomenon between 1960s and 1990s.

In contrast, West Bengal is one state where pre-, post- and election-day violence is a somewhat routine affair even now. Curiously, the law and order situation in West Bengal, otherwise, is much better than Bihar where criminals have taken the state by storm. Almost a hundred people have lost their lives in various criminal incidents since the November 10 election results were announced. Besides, other heinous crimes are a common phenomenon in the state.

In one such crime on December 9, two dozen dacoits looted gold worth Rs 10 crore from a jewellery showroom in the heart of Darbhanga town and the police have failed to recover the looted jewellery till a week later.

Contrary to this, in Bengal—where the crime rate is not so high– last year’s Lok Sabha elections witnessed the vandalisation of the statue of the famous 19th century reformer, Ishwar Chandra Vidyasagar, in the centre of Kolkata. This was something unusual even by the West Bengal standard and the ruling Trinamool Congress (TMC) directly blamed the Bharatiya Janata Party (BJP) for it.

Apart from West Bengal, three other north Indian states of Bihar, Uttar Pradesh and Haryana were notorious for the election-related violence in the latter half of the 20th century.

For example, Meham in Haryana became synonym to mayhem after the killing of eight voters by booth-grabbers in the 1990 by-elections. The then Chief Minister, Om Prakash Chautala, the grandfather of present deputy CM, Dushyant Chautala, was the candidate. Om Prakash Chautala became the CM as his father Devi Lal (who was earlier the Chief Minister) took over at Number 2 position under the Prime Ministership of V P Singh in 1989-90.

In Bihar, about two dozen people were killed in Jehanabad and Ara Lok Sabha seats in post -poll massacres in 1984 and 1989 parliamentary elections, respectively.

But violence in Bihar, especially after the imposition of the Mandal Commission report in August 1990, acquired a different dimension. On March 10 the same year, Lalu Prasad Yadav had become the Chief Minister of the state and used to enjoy full support of backward caste and scheduled caste leaders like Nitish Kumar, Sharad Yadav, Ram Vilas Paswan, etc.

While violent incidents in West Bengal—election or no election—are more political in nature, in Bihar, they often have caste overtones. If most of those killed in various massacres by private armies of the affluent farmers were backwards and Dalits, the underground ultra-Left outfits like the Maoist Communist Centre, the CPI ML (Liberation) and CPI ML (Party Unity) had killed hundreds of upper caste-men in 1980s and 1990s and even later.

In Bengal, the nature of violence was hardly on caste lines, be it during the Naxalbari uprising or blood-letting during the Left Front rule or frequent clashes between the supporters of Mamata Banerjee and BJP.

Politics in Bengal took a different dimension during the Left Front rule between 1977 and 2011 when the partymen tried to control all the sections of society. Be it clubs at the locality level and village level, Durga Puja samitis, mandir, masjid  committees, etc. the partymen would be present in all these  bodies. This is not to ignore their presence in trade unions, peasants’ and workers’ associations.

When Mamata came to power, she had the slogan of ‘Badlao not Badla’, that is, ‘Change but not Revenge’. But, gradually, the culture of violence continued. While in her first term, the tussle was largely between the Left and Trinamool supporters, in her second term, that is, after 2016, BJP emerged stronger. The saffron party won 18 Lok Sabha seats in the 2019 Lok Sabha elections out of the 42 seats in West Bengal. The vote share of the party touched 40 per cent.

Interestingly, many of the Left Front workers and lower-level functionaries joined BJP—some came via the Trinamool while many others directly.

In the highly-politicised West Bengal, where bi-polar politics still exists—in many other states, the opposition has completely been marginalised—there is enough scope of a cut-throat tussle.

If there are dis-similarities in culture of political violence between Bihar and West Bengal, there are similarities as well. For example, there are experts who hold West Bengal responsible for the spread of the Naxal movement or agrarian unrest in Bihar.

They are of the view that when the Naxalites were being crushed in West Bengal in early 1970s, many of their leaders and Red Army fighters fled and took shelter in Bihar, especially in old Gaya (Jehanabad and Aurangabad were then its part), Bhojpur, Rohtas, Munger, Patna, Muzaffarpur and even Begusarai districts—the last name was already a CPI bastion. Many others disappeared in the jungles of what has now become Jharkhand.

But it was in the Green Revolution region on both sides of the Sone river that the bloody clashes between the ultra-Left and private armies of the affluent farmers of the upper castes lasted for almost 30 years. This region is also called the food basket of Bihar and was in 1930s famous for the peasants’ movement, then led by Swami Sahajanand Saraswati.

However, one thing is common in both the states, then a part of the united Bengal province. That was the impact of Permanent Settlement of 1793. While Bengal witnessed land reforms and empowerment of sharecroppers during Operation Barga under the Left Front rule, in Bihar, such a move was stalled by the landlord lobbies in the initial post-independence years.