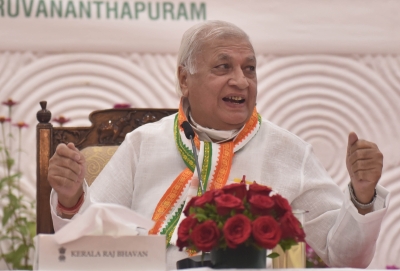 Back in the state after an eight-day gap, Governor Arif Mohammed Khan on Monday yet again slammed the Pinarayi Vijayan government over its functioning.

Kochi, Nov 21,2022:  Back in the state after an eight-day gap, Governor Arif Mohammed Khan on Monday yet again slammed the Pinarayi Vijayan government over its functioning.

“This government works only for its cadre. If someone sitting in the Chief Minister’s office directs vice-chancellors, and the Chief Minister doesn’t know, then it’s his incapability and if he knows of it, then he is also a party to what’s happening,” said Khan.

Khan was reacting on the recent High Court verdict ruling Priya Varghese, wife of Vijayan’s private secretary K.K. Ragesh, that she does not have the necessary qualifications to be appointed as Associate Professor at the Malayalam department of Kannur University.

“I have nothing personal against anyone as my job is only to see the law of the land is upheld. Universities have to be free of executive interferences, and under qualified and unqualified will not be appointed. I am doing this because the common man should get a feeling that there is equality in law,” said Khan and added that appointments will be based only on qualifications.

Reacting on the special assembly session called from December 5 to pass a Bill removing the office of Governor from the chancellors post, he said that Kerala was formed in 1956.

“But, even before that, the Governor was the chancellor. So they just can’t break the national conventions and rules as this is beyond their power. If they wish, let them try. Now they are upset because of the judicial verdict and now they are trying to cover up that embarrassment as this government works only for their cadre,” added Khan.

He also said that he has heard that the in-charge VC appointed to the A.P.J. Abdul Kalam Technological University based on a Supreme Court ruling is unable to perform her duties as she is being obstructed and this is a criminal offence. “I will take appropriate steps after studying the issues in detail,” he added.