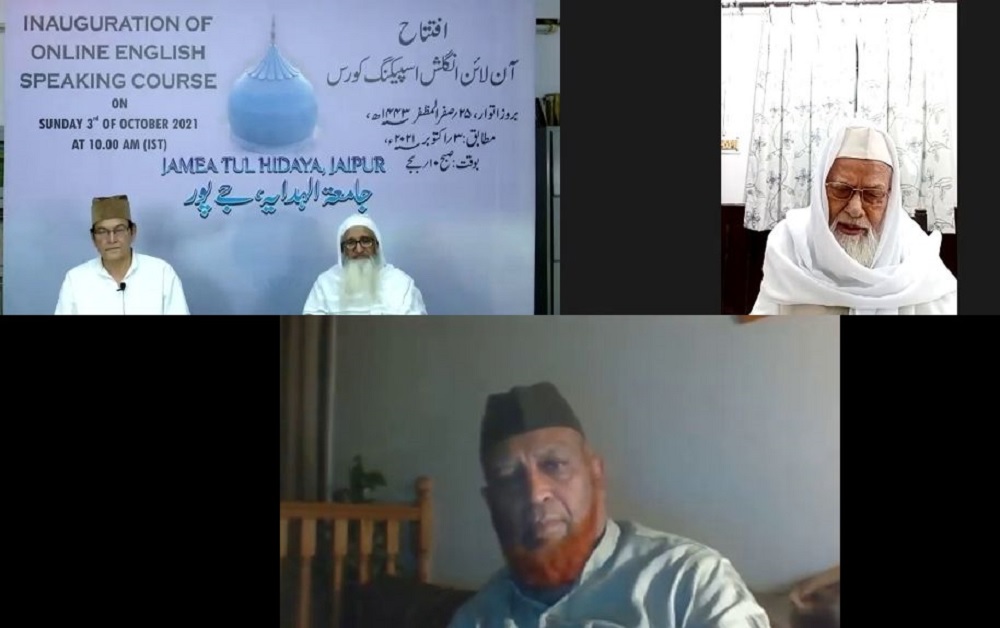 The formal online inauguration of the Online course was held the other day wherein Islamic clerics from Canada and UK were also guest speakers. The function was presided over by Maulana Syed Mohammed Rabey Hasani Nadvi, who is Chancellor Darul Uloom Nadwatul Ulama, Lucknow and also president of All India Muslim Personal Law Board

It may be recalled here that Jamea Tul Hidaya recently has started On-line Ifta course and it is now starting one-year online English-Speaking Course.

Jamea Tul Hidaya is a seminary well-known worldwide for imparting Theological as well as contemporary education to its students.

Maulana Mohammad Fazlur Rahim Mujaddidi, Chancellor Jamea Tul Hidaya, in his key-note address said: “Today is the golden day in the history of Jamea Tul Hidaya. Although English language is included in the syllabus of the Jamea from primary classes to Aalim, yet feeling its significance, English Speaking Course is going to be started for the alumni of Madaris.

He also said: “There are six schools which are running under Maulana Abdul Rahim Educational Trust in Jaipur and more are in the pipeline. For civil services exams, Crescent Academy for civil services exams was established where free coaching is being provided to the students. To get benefits from government schemes, and for the political and educational awareness, conferences and seminars were organised in the whole country”.

“In modern times English has become an international language, therefore, to ward off religious misunderstandings, for economic stability and for trade and employment, it is becoming more and more important to learn this language”, he further said.

Maulana (Dr.) Iqbal Masood Nadvi, who was Professor at King Saud University, Riyadh, and is presently living in Toronto (Canada), in his speech said: “Translation cannot be equal to the language form where it has been translated so we should have the capacity to understand the text in its original language. He also said: “The person who learns the language of others defends himself from any kind of cheating”.

Abdur Raheem Kidwai, Prof. of English and Director UGC Human Resource Development Centre, AMU said: “Growing numbers of Madrasas are introducing English as a subject which is very good. But practically there are no trained English teachers as there is total lack of teachers training program, absence of syllabus and textbooks and no language labs”. But he said he has many hopes from this Course of Jamea Tul Hidaya.

He also advised to arrange a comprehensive program integrating all the four skills of the language LSRW, i.e., Learning, Speaking, Reading and Writing. He assured to give any support to this program from him and his colleagues.

Maulana Syed Mohammed Rabey Hasani Nadvi in his presidential address said: “It is a congregation of much importance. It is the high courage of Maulana Fazlur Rahim that he took this work on his shoulders. I hope it will encircle the whole world and benefit the alumni as well as the objective of the Madrasa”. Recalling his association with the founder of Jamea Tul Hidaya, late Maulana Abdur Rahim, he acknowledged the works done by this institute and appreciated the endeavours of Maulana Fazlur Rahim Mujaddidi.

Abdul Kareem Gheewala, Islamic scholar and social activist from Leicester (UK), emphasized about the importance and significance of English language. It can be helpful in clarifying the doubts and criticism about the Islamic teachings and practices and in propagating the correct spirit and right message of Islam to the world.

He congratulated the Jamea and all those who are behind the program and appreciated the commitments and dedication shown by Maulana Fazlur Rahim. He was confident that it will become a very popular course and benefit Islamic scholars in many ways.

Dr. Saud Alam Qasmi, Dean Faculty of Theology in Aligarh Muslim University. (AMU), said: “Maulana Fazlur Rahim Mujaddidi is not only the torch-bearer of Islam in India but has progressive thinking towards the issues related with Muslims. He has taken initiative for so many things to uplift Muslim society, particularly the younger generation.

He said that the On-line programs, Ifta and English-Speaking Course, are marvellous and this program will help our younger generation to acquire the contemporary world knowledge and literature. He also called English as the language of opportunities. He said Maulana Fazlur Rahim is a magnetic personality and congratulated him and his team to initiate this English Speaking Online course.

Mohammad Iqbal Khan, Director of Crescent Academy for Civil Services Exams, New Delhi, and organiser of this one year online English-speaking course described the brief history of Jamea tul Hidaya and its founder. He addressed particularly to the students and shared his views on how to learn to speak English in a better way.

The program concluded with Dua to Almighty Allah by Maulana Fazlur Rahim. At the outset he rendered recitation of the Holy Quran in his melodious voice.

previousIndian Immigrants to the United States in Green Card Limbo