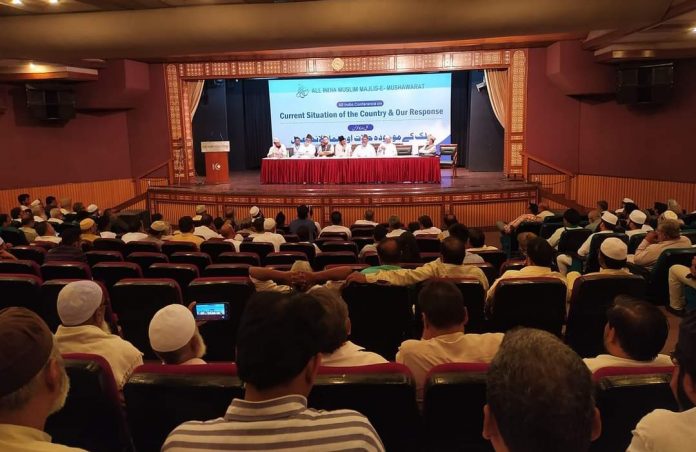 New Delhi: As assumed, the much-hyped two-day brainstorming sessions organized by All India Muslim Majlis-e-Mushawarat (AIMMM) here ended with the release of ‘cut-and-paste’ declaration, placating every concerns without spelling out any concrete measures to tackle the ongoing onslaught on the Muslim community.

“It was a pre-scripted event,” said one of the delegates who came from Hyderabad to attend the event, requesting anonymity. He added that it was disappointing to see the ‘lackluster approach’ of some community leaders.

While on the first day of the event titled National Conference on Current Situation of Country and Our Response several steps were proposed by  a couple of delegates, but the final declaration released to the press talked little on them. Notably, Jamaat-e-Islami Hind (JIH) chief Saadatullah Hussaini and Ittehad-e-Millat Council Party chief Maulana Tauqeer Raza on the first day had proposed some concrete measures to tackle the increasing communal situation. Precisely, Raza had underlined the need to hold demonstrations across the country and fill jail (jail bharo) on one day. On the other hand, Hussaini had proposed confidence-building measures and winning the hearts and minds of the majority. However, the final declaration didn’t incorporate any of the suggestions.

“What’s the use of the declaration which has no suggestions or action plan to tackle the problems being faced by the Muslim community?,” asked another delegate who was also one of the speakers in the event, adding that there should be some concrete measures  to protect mosques, protect lives of the Muslims, protect lynching etc.

Issuing a declaration without a roadmap to implement it  makes no sense said many participants and even questioned the relevance of the 10-point plans.

“The declaration is a ‘cut-and-paste job’ that Muslim organisations keep releasing after every seminars and symposiums,” said a journalist who covers the community issues for decades. He added that since the existing community leaders have been left discredited, primarily due to “mishandling” of Babri Masjid and triple talaq issues, they fear giving any call for rally or public gathering lest the little respect they command should be exposed.  “Their main concern is to keep their shops going,” he added.

According to sources, AIMIM president Navaid Hamid appeared more eager to lead a delegation to Prime Minister Narendra Modi or President Ram Nath Kovind. However, there was little taker of the proposition in the meeting as in the past such meetings yielded no result.

What is the use of proposed meeting of Musahwarat delegation with Modi? Do they want to repeat the same with Gyanvapi  as they did with Babri Masjid,” asked a delegate Hamid’s meeting with Ajit Doval after decision in Babri Masjid case.

The messages form political leaders like Sharad Pawar and Priyanka Gandhi also cast doubt over  the political ambition  of Mushawart president, instead of working on ground Hamid sb  is interested in meeting with those who created the problems deliberately , he added.

Many said it was a JIH-backed event and pointed out the absence of Madanis (Jamiat Ulema-i-Hind leaders Arshad Madani and Mahmood Madani). The uncle-nephew duo, who command a great deal of influence in a section of madrasas, didn’t turn up. Neither they sent any message to offer any excuse for not attending the event. Faisal Rahmani, the Ameer of Imaraat-e-Sharia, also didn’t come. Head of UP Mushawarat was also not present in the conference. Very small number of delegates from Uttar Pradesh and Bihar made it to the event.

As many as 150 delegates from 18 states had come to Delhi to attend this conference with a hope to see some ‘action plan’, but they returned back “clueless, disappointed.”

A sexagenarian delegate from Hyderabad raised a question on the viability of the AIMMM seeking to know the works done by the apex body over the last eight years – since assumption of Hamid as its president. “What is the contribution of AIMMM in the last eight years? We don’t expect anything from this organisation,” he asked.

“Navaid Hamid always complains about scarcity of funds to run or maintain Mushawarat offices. He says there is no money to repair even the AC, but the first thing he did was to form a committee for constructing a new building for AIMMM. Is it the priority?,” revealed another participant.

During the meeting, the issue of giving a miss to the Popular Front of India (PFI) and Social Democratic Party of India (SDPI) was also raised, but Hamid stated that the AIMMM didn’t give membership to  any organisations which had non-Muslims in the leadership role. He was reminded that the Muslim League has many non-Muslim leaders and  above all PFI has no non-Muslim in its rank and file.

It is worth mentioning here that Hamid terminated more than 30 members, including former AIMMM president Zafrul Islam Khan and  Dr, Tasleem Rehmani for allegedly not paying the annual membership fee.

When contacted Rahmani claied, “It’s not true, in November 2021 I received mail to pay the annual membership fee.  I asked about the amount and the details of the account for transferring the amount, but I didn’t receive any reply. ”

Unfortunately, a platform which was formed to unite Muslims, is “waging divisions” among the community organisations at a time when it is supposed to bring all concerned Muslim bodies and individual on board, added Rehmani.

In my view the declaration is very important, but how it will be executed is not clear, said a delegate.

Below here is the declaration issued on the conclusion of the two-day event on 20 May:

2)We will oppose any attempt to make the Constitution defunct or change it.

3) We will start dialogue with all sections of the society

8) We will continue our efforts for educational,  financial and social development.

9)We declare that we will work on common problems of the community and the country unitedly .

10) AIMMM will try to implement the above declaration at center , state and local level.