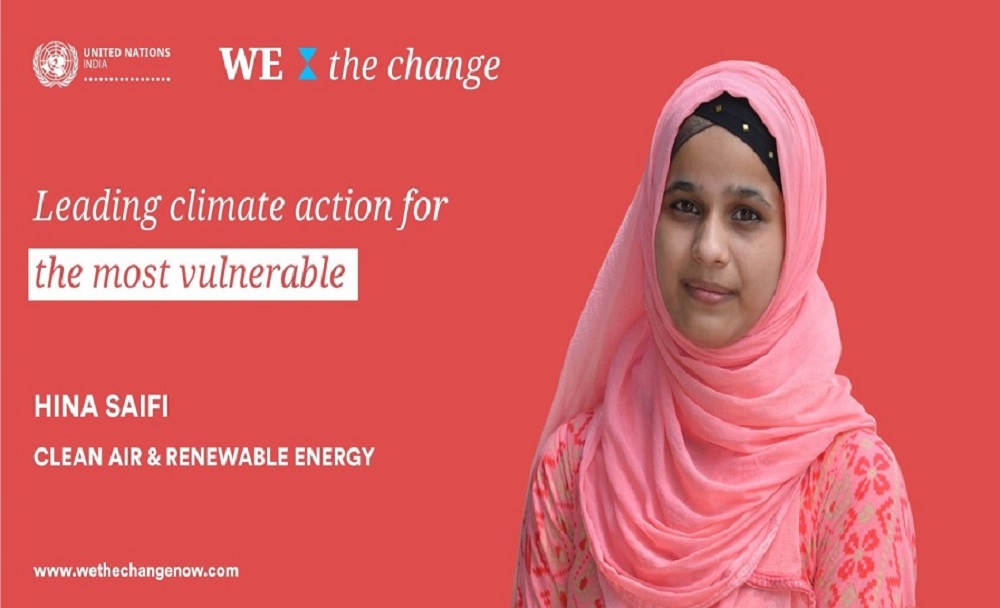 The initiative, according to the UN, aims to showcase climate solutions pioneered by young Indians

Sisola is a backward village in Meerut, Uttar Pradesh. The village has one middle school. Most of the people are poor and child labour is rampant. The boys and girls work in a footfall making factory to support their families.

When Hina Saifi, 19, completed her 8th grade, she was told by family and neighbours to quit studies. They were not ready  to let her go to school outside the village. However, her mother Fareed sent Hina to her aunt’s place in Khatauli where she stayed for two years and completed her 10th. When she returned home she had to face  the same pressure to give up but somehow she managed to pass 12th class.

While in school she was also working in a football factory where she would earn a meagre 1500 – 2000 Rupees per month. After completing her 12th the family told her they can not afford to send her to college and she had to budge.

Then an NGO worker, Mukesh Kumar, intervened. It took him multiple visits and discussions to convince Hina’s family to let her return to school. In the process she lost one year of her education. “Her family was not in a position to afford her college education,” said Kumar, who helped her with fee concession at a private college.

But today she has made her family and village proud; on Thursday the United Nations’ India  unit announced that Hina has made it to the list of 17 Climate Change leaders who will be the face of United Nations India’s new campaign #WeTheChangeNow.

The initiative, according to the UN,  aims to showcase climate solutions pioneered by young Indians as a celebration of India’s climate leadership.  The 17 young champions will invite young Indians to join the movement by sharing their climate action stories on the campaign website.

Hina  is “happy and excited” to have been selected for the role.

“I wanted to show my people what a girl is capable of and I hope I will be able to inspire them and let their girls go to school,” She said, speaking with Clarion India. “I hope my selection will trigger a concern about environmental issues  among my people to save our future.”

Hina is currently pursuing a degree in business administration from a private  college in Meerut. She said she  dons a Burka when she goes to college.

Hina grew inclined towards environmental activism in science class in her  school where she held rallies to create awareness among children. She led a door to door campaign informing people about the idea of segregation of waste. “I want to create awareness in rural areas that environmental pollution is a global problem,” she said. “I want to make them aware about the implications of climate change.”

Hina is associated with En Bloc, an NGO that is run by Mukesh Kumar . In April this year she was chosen by the NGO to travel to Lucknow where she delivered a speech at an event. Hina said Sania Anwar, a climate activist, who was present at the event was impressed by her speech and recommended her name for the United Nations climate change leaders.  Earlier this week she came to know about her selection.

At #WeTheChange campiagn Hina would get to interact with the policy makers.

Her profile on the campaign website says Hina has campaigned for solar-powered solutions to air pollution, like solar pumps or rooftop solar installation for public and community buildings.

“I believe that if there’s public awareness first, then we can improve the environment. It will happen if people are aware of climate friendly behaviours and actions. This is why I want to work in the space of public awareness and mobilization,” the website quotes her saying.

nextOIC Condemns ‘Systematic Persecution and Violence’ Against Muslims in India