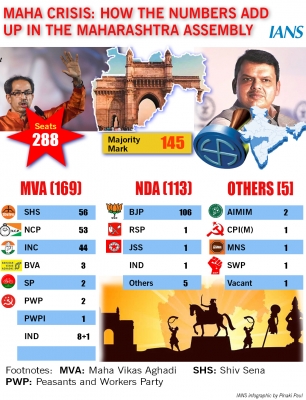 Following the fractured verdict in the October 2019 Maharashtra Assembly elections, both the ruling Maha Vikas Aghadi and Opposition Bharatiya Janata Party have been grappling with the ‘numbers game’ to secure their respective positions for the past 30 months.

Mumbai, 21st June 2022:  Following the fractured verdict in the October 2019 Maharashtra Assembly elections, both the ruling Maha Vikas Aghadi and Opposition Bharatiya Janata Party have been grappling with the ‘numbers game’ to secure their respective positions for the past 30 months.

In the 288-member Maharashtra Legislative Assembly, the mid-way mark is 144, while the current strength is 287 as one Shiv Sena MLA Ramesh Latke of Mumbai, passed away recently.

Besides the MVA-BJP, there is a significant 29-strong group of MLAs who are independents or from smaller parties who have become important for both the ruling and opposition side.

The MVA strength is: Shiv Sena (55), NCP (53) and Congress (44), and with the support of smaller parties and independents, the ruling alliance commands around 169 legislators.

The BJP has 106, plus the support of smaller parties and independents giving a strength of around 114.

The rest five are unattached to either group ostensibly to keep their ‘political bargaining power’ evergreen, as was witnessed in this months’ biennial elections to both Rajya Sabha and Maharashtra Legislative Council.

In the ongoing crisis that has gripped the state, Shiv Sena’s senior Minister Eknath Shinde has pitched tent in Surat, Gujarat — ruled by the BJP — and the home state of Prime Minister Narendra Modi and Union Home Minister Amit Shah.

Shinde has reportedly gone away with an estimated dozen to two dozen legislators, which has posed a question mark on the MVA’s very survival, though the Sena moved quickly to open up back-channel communication with a majority of the potential disgruntled rebels.

Given the BJP’s past track record of toppling governments in Madhya Pradesh, Karnataka and other states earlier, the sudden yet un-declared ‘Operation Lotus’ has pushed the MVA government on the brink.

Battling the Shinde conflagration on one side, the MVA allies have also tried to herd and secure their respective legislators besides their supporting smaller parties and independents.

The MVA allies have kept a brave face and maintained that there’s no immediate threat to the government, as indicated by Sena’s Sanjay Raut and Congress’ Prithviraj Chavan, Ashok Chavan and others.