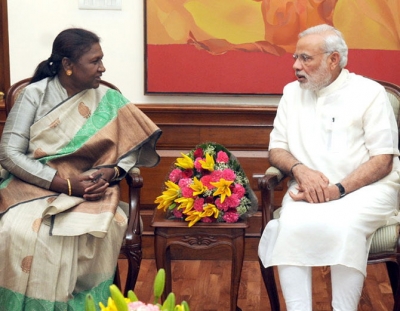 The BJP on Tuesday chose former Jharkhand Governor and tribal leader Draupadi Murmu as its candidate for the post of President, against opposition candidate Yashwant Sinha for the election to be held on July 18.

Ranchi, 21st June 2022: The BJP on Tuesday chose former Jharkhand Governor and tribal leader Draupadi Murmu as its candidate for the post of President, against opposition candidate Yashwant Sinha for the election to be held on July 18.

Murmu, who hails from Odisha, becomes the first woman tribal leader to contest for the country’s highest constitutional post. Before this, she also holds the record of being the first tribal woman Governor in the country.

Her tenure as the Governor of Jharkhand for more than 6 years was not only been non-controversial, but also memorable. After the completion of her tenure, she left the Jharkhand Raj Bhavan for her village in Odisha’s Rairangpur on July 12, 2021 and is living there since then.

Harinarayan Singh, editor-in-chief of a Hindi daily published from Ranchi, said that the name of Murmu for the post of President was also discussed in 2017.

Murmu has a rich experience of more than six years as a Governor. The BJP, with her candidature, is trying to give a symbolic message to the whole of country in many ways.

Her selection for the top post can also be a part of the BJP’s strategy to make inroads into the tribal society, which has been a bastion of the Congress so far. The BJP is eyeing upcoming state Assembly elections, and tribals are its main focus area in Gujarat, Madhya Pradesh, and Chhattisgarh where their votes are crucial for the party’s scheme of things.

Murmu had served twice as an MLA and once as a minister in Odisha, before being sworn in as the Governor of Jharkhand on May 18, 2015. Her five-year term as governor was to end on May 18, 2020, but was automatically extended due to non-appointment of a new Governor due to the ongoing Covid pandemic.

She was always aware of the issues related to tribal affairs, education, law and order, and health of Jharkhand. On several occasions, she questioned decisions of the state governments, but always with constitutional dignity and decency. During her tenure as the ex-officio Chancellor of the Universities, the vacant posts of Vice-Chancellor and Pro-Vice-Chancellor were appointed in many universities of the state.

Senior Professor at Vinoba Bhave University Dr Shailesh Chandra Sharma recalls that she herself organised Lok Adalats on issues related to higher education in the state, in which about 5,000 cases of university teachers and employees were settled. In order to centralise the enrollment process in the universities and colleges of the state, she created the Chancellor’s portal.

Born on June 20, 1958 in Odisha in a simple Santhal tribal family, Murmu started her political career in 1997. She was elected councillor of the district board in Rairangpur in 1997. Prior to joining politics, Murmu worked as an honorary assistant teacher at Sri Aurobindo Integral Education and Research, Rairangpur and as a junior assistant in the Irrigation Department, before joining politics. She has been MLA twice in Odisha and also got a chance to work as a minister in the Naveen Patnaik government, when the BJP was in coalition with the Biju Janata Dal.

Murmu was also awarded the Neelkanth Award for Best Legislator by the Odisha Legislative Assembly.