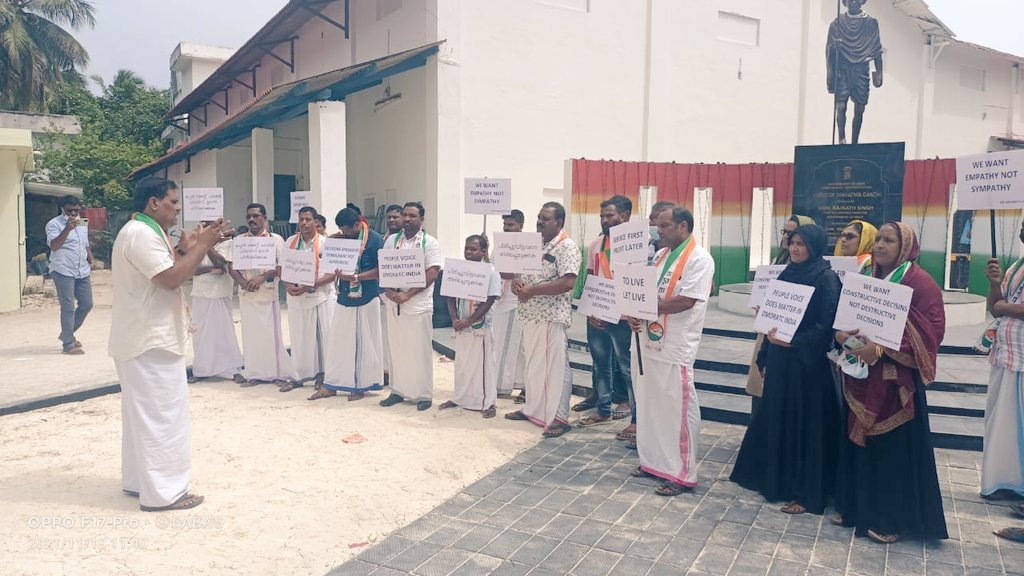 Sailing the waters of the Arabian sea to Kochi or Mangalore is not a holiday for the islanders of Lakshadweep. They sail for education, trade and jobs. And the recent fare hike in transportation has come as a major blow to the islanders, who are 70,000 in population and scattered over ten islands.

Following an order dated 9 November by the Union Territory administration, the transportation charges spiked in double, which triggered outrage. However, the administration took to disciplining students and filing FIR charges on protesters including Mohammed Faizal, the only parliamentarian from the island.

On 10 November, Mohammed Faizal along with the Nationalist Congress Party (NCP) members protested at Gandhi Square in Kavaratti, for which he was booked under provisions of “public nuisance” and “negligent act of likely infection spread” among others.

Faizal’s letter addressed to the prime minister read, “it is the national obligation of the government to provide connectivity facilities for its citizens, the transport sector of Lakshadweep was operating as an essential service and not on profit loss statement.”

The population depends upon waterways for inter and intra transportation. And though the border population is remarked as a strategic asset to the country and that providing connectivity and basic facilities to ensure sustainable living is a must, the recent developments in islands are on the contrary.

“Earlier there was a transportation committee, which had a say in transportation services including the prices, which now has been dismissed,” Shafi, NCP state committee member said to Maktoob, clarifying that prices can be hiked but with people’s consultation.

“Previously when fares were hiked, medical emergency services were always exempted,” says Faizal MP. And now with the increased fares, an air ambulance would cost around 30,000 to 50,000, if accompanied by a helper.

And it is not the health sector alone that is in chaos. Recently students had boycotted classes demanding the timely distribution of scholarship, recruitment of teachers into long-held vacancies and restarting of study tours along with the demand to decrease ship fare.

However, following the mass one-day strike, Director of Education, Vishal IAS issued a notice to all school principals asking for the submission of student lists that participated in the strike.

“Parents were summoned and disciplinary lectures were taken. And some schools even asked students to sign bonds assuring abstains from further protests,” says Anees, President of Lakshadweep Students Association.

Apart from these, police personnel were found conducting door-to-door warnings for participating in protests, Anees added.

Nevertheless, protests and demonstrations are continuing in all islands under the coordination of the Save Lakshadweep Association (LSA).

Since the arrival of the new administrator, Praful K. Patel, education on the island has collapsed as schools face shortages of teachers as new recruitments or contractual appointments don’t happen. After parents had raised complaints on the same, schools had opted for guest teachers.

“I was asked to teach from my school for Rs 8000 per month as a guest teacher. They are not even taking teachers on a contract basis, where they have to pay Rs 20,000 per month,” Anees alleged.

The administration has dismissed all contract employees in every sector. “The administration development perspective of allocating hospitals and schools only on population estimation is not practical. Though the population is merely 70,000 it is widely distributed over ten islands,” Faizal told Maktoob.

“Moreover, there is no student’s concession ship fare that can be availed practically,” Anees added.

With a shortage of teachers, quality of education is likely to fall down alarmingly with extra-curricular activities, dictation and notebook correction suffering the toll.

“While the annual salary expense of contractual employees is only two crores, the administration has dismissed them. However, they had spent 1 crore 35 lakhs on an event management company on Gandhi Jayanti celebration,” Faizal claimed.

Cutting off ties with Calicut University

Last month, the Lakshadweep administration had sent a notice to Calicut University informing them they are cutting off ties. For the last 15 years, Calicut University was the sole university on the island with its centres in three islands; Kavaratti, Kadmat and Andrott.

However, the abrupt decision taken by the administration came as an insult to Calicut University, as they were not consulted. Leaving the university in financial loss and shock, new academic ties have been made with Pondicherry University. The students on the island are left with no option but to migrate to Pondicherry University amidst an ongoing academic year.

Last year, BJP came to power in coalition with All India N.R Congress in Pondicherry.

For a year, the majorly Muslim populated islanders are slapped one after the other with bizarre policies and regulations that don’t go along with the living realities of the island. Forced land acquisition, ban on those having more than two children from contesting elections, and prohibition of cattle slaughter, are some.

As no longer do people get to have a say in policymaking nor permitted to protest those policies, the islanders of Lakshadweep are taking up the battle legally against the administration to safeguard their democratic rights.

previousFriday Namaz in Gurugram Disrupted Again, This time in the Name of Puja to Mark 26/11

nextAround web: Thousands of farmers gather to mark one year of historic protests