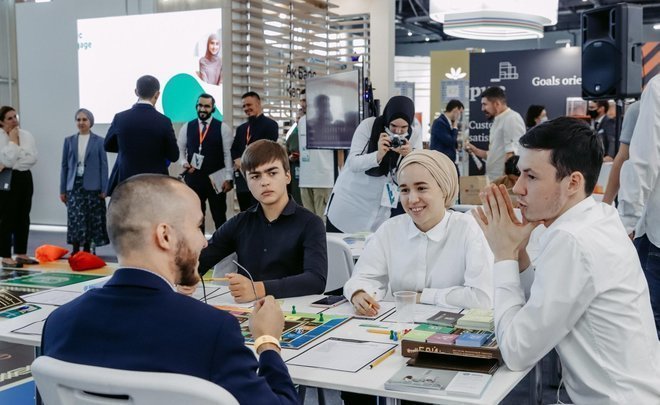 The 13th Russia — Islamic World: KazanSummit 2022 is taking place in Kazan from 19 to 21 May 2022. Sharing Economy and Global Good of Halal is its theme. World Halal Day forum, Russia Halal Expo exhibition, a mechanical engineering forum and events dedicated to the 1100th anniversary of adoption of Islam by Volga Bulgaria will be held during the event. Realnoe Vremya tells you the details about this year’s forum and compares its scale to the previous one.

This year, the summit is traditionally held at Kazan Expo international exhibition centre. It should be reminded that in 2021 it was decided to hold it in a hybrid format. So some events were offline at Kazan Expo, others were online on kazansummit.ru. In 2020, KazanSummit had to be cancelled because of the coronavirus pandemic.

On 19 January, head of the Tatarstan Investment Development Agency Taliya Minullina said that the exhibition area in 2022 would increase from 5 to 10,000 square metres. It is noteworthy that before the pandemic in 2019, the area grew more than 3,5 times to 5,000 square metres. The total area of Kazan Expo is 75,400 square metres, while its infrastructure includes a modern congress hall for 3,000 seats, 35 transformer halls with a capacity from 30 to 500 people, a car park and food zones.

Also, 26 diplomatic missions and 171 media representatives attended the event last year, this year, there have been 12 and 250 respectively.

This year, the list of speakers includes new names:

COST OF THE EVENT

Last year, 113 exhibitors participated in the exposition, some of them were from Indonesia, Turkey, Kazakhstan, Azerbaijan, Kyrgyzstan and others. This year, the number of exhibitors will grow as well as the number of countries. The organisers don’t disclose the cost of the event. However, at the summit last year, head of the Tatarstan Investment Development Agency Taliya Minullina said 12 million rubles were allocated from the republic’s budget. She noted this sum didn’t even cover 50% of all organisational expenses.

There is an admission fee, the participation includes two types of packages: Standard for 25,000 rubles and Premium for 50,000. The cost of the packages hasn’t changed over the year.

For comparison, the participation in the top Petersburg economic forum is almost 20 times more expensive. Last year, journalist Ksenia Sobchak said the price for the participation in the Petersburg International Economic Forum rose to 900,000 rubles and was indignant about buffet prices: “One can eat only for 3,800 rubles now. In other words, you sat at the table, order green tea but you anyway paid 3,800 per person.”

Realnoe Vremya’s editorial board will be working at the Russia — Islamic World: KazanSummit 2022 international economic summit.