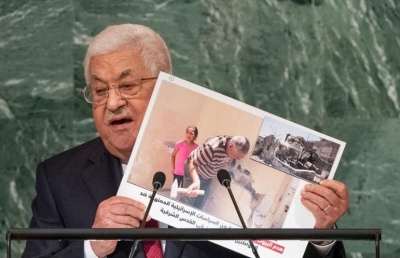 Palestinian President Mahmoud Abbas said that Israel has decided not to be a partner of Palestine in the peace process and that it will be treated as such.

United Nations, Sep 24, 2022:  Palestinian President Mahmoud Abbas said that Israel has decided not to be a partner of Palestine in the peace process and that it will be treated as such.

“It is clear that Israel, which is ignoring the resolutions of international legitimacy, has decided not to be our partner in the peace process,” said Abbas in his speech to the General Debate of the UN General Assembly.

Israel has undermined the Oslo Accords, which it signed with the Palestine Liberation Organization (PLO), he said, adding that it has and still is, through its premeditated and deliberate policies, destroying the two-state solution, he said.

“This proves unequivocally that Israel does not believe in peace. It believes in imposing a status quo by force and by aggression.

“Therefore, we do not have an Israeli partner anymore to whom we can talk. Israel is thus ending its contractual relationship with us,” said Abbas.

Palestine does not accept to remain the only party respecting the agreements it has signed with Israel in 1993. Those agreements are not valid anymore because of the persisting violations of Israel, he said.

“Therefore, it is our right, rather, our obligation to look for other means, to recover our rights and to achieve a peace built on justice, including the implementation of the resolutions that were adopted by our leadership, especially our parliament,” said Abbas.

The state of Palestine will also start the accession process to join other international organizations, he said.

Abbas called on the UN Secretary-General to work relentlessly to elaborate on an international plan to end the occupation of the land of Palestine to achieve peace, security and stability in the region, in line with UN resolutions and with the Arab Peace Initiative.

“The state of Palestine is looking forward to peace. Let us make this peace to live in security, stability, and prosperity for the benefit of our generation and all the people of the region,” he said.