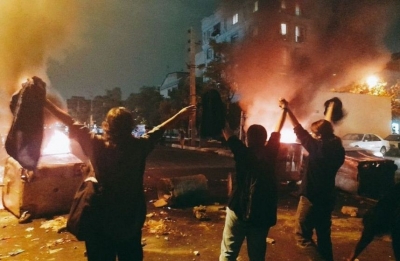 Demonstrations have spread to most of Iran’s 31 provinces and almost all urban centres, pitting anti-government demonstrators against regime forces, including the military, and posing the most serious test to the hardline state’s authority in more than 13 years, local media reported.

London, Sep 25, 2022:  Demonstrations have spread to most of Iran’s 31 provinces and almost all urban centres, pitting anti-government demonstrators against regime forces, including the military, and posing the most serious test to the hardline state’s authority in more than 13 years, local media reported.

The demonstrations have evoked images of an anti-government protest in 2009, known as the green revolution, that followed contentious presidential elections and marked the last time citizens faced off against security forces on a large scale.

“The main difference between the current protest compared to the green movement in 2009 is that now people are fighting back; they are not afraid of the brutal regime,” said Sima Sabet, an Iranian journalist and presenter on the Iran International TV station, The Guardian reported.

Firuzeh Mahmoudi, executive director of human rights NGO United for Iran, said the recent unrest followed months of Iranians being prepared to hold smaller protests on an array of issues. “The uprising in 2009 in some ways was more expansive in certain cities,” she said.

“We had millions of people protesting in certain cities during the biggest day of that protest. It was the biggest thing since the [1979] revolution. They did not see it coming and were very surprised.

“Now we’re seeing not only big cities, but smaller cities that we’ve never seen before. We’re now also seeing unprecedented ways in which people are showing up, in the messaging and the boldness. Things are a lot more unified.”

Mahmoudi said chants heard at rallies, such as “We’ll support our sisters and women, life, liberty”, had been heard around the country.

“This is unprecedented for us. We have never seen women take their hijab off in mass like this. Burning down the police centres, running after their cars, burning down the pictures of [supreme leader Ayatollah Ali] Khamenei,” she said, The Guardian reported.

Drawing on lessons learned over the past decade in anti-government uprisings elsewhere in the Middle East, smartphones have been used as organising tools, with messages and places of demonstrations widely circulated, despite widespread cuts to the country’s internet.

“They have tactics about how to send their videos outside of Iran despite the cut-off of the internet,” said Sabet.

“For the first time now in Iran, women are burning their hijabs with the support of men,” The Guardian reported.

Substantial numbers of Iranians have long been opposed to unflinching societal rules and the reach of the state’s security forces, which have enforced one of the region’s most formidable theocratic states over more than four decades.

As long as the protesters continue agitation on the streets and wear out the security forces, they will sustain and maybe expand the momentum. In at least one small city, Oshnavieh, in north-west Iran, the regime has lost effective control and retreated to the outskirts.

Internet provider Starlink has announced that it will activate its satellite so the internet can be accessed inside Iran, The Guardian reported.

previousIsrael no longer partner of Palestine in peace process: Abbas

nextYoga to be compulsory for school students in UP