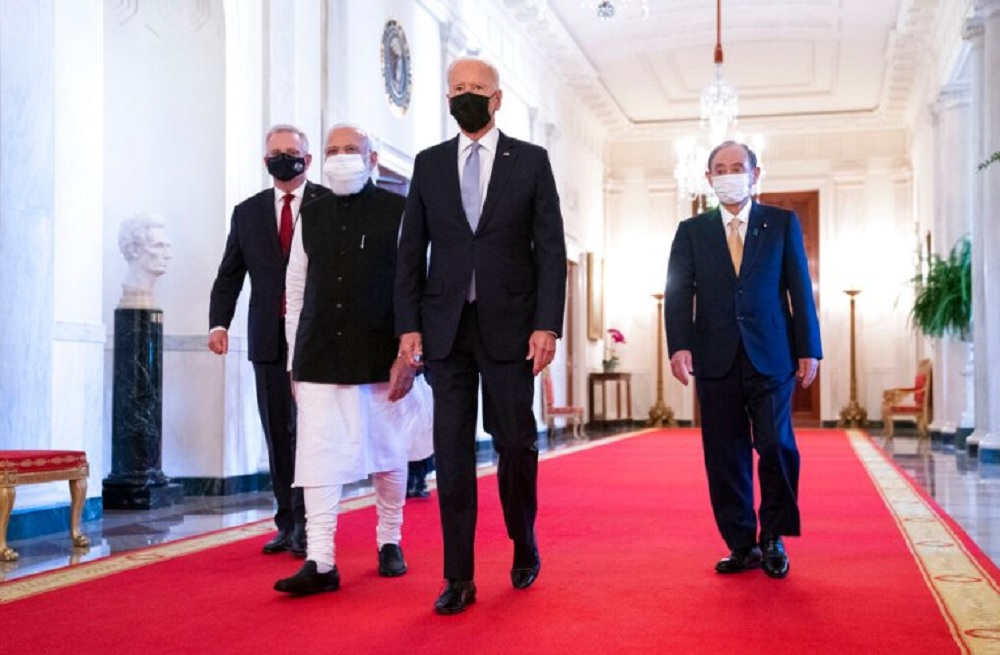 India, Israel, and the United Arab Emirates have initiated a Mid-East Quad on October 19, 2021. This move was to mark the first anniversary of the Abraham Accord that was signed between Israel and the UAE and Bahrain in August 2020. The Abraham accord marks a significant departure in Arab world politics and is seen as a step to accommodate Israel in the larger matrix of the gulf region.

Since then, Israel and the UAE have become good partners and both enjoy good relations with India and the U.S.  The US wields considerable influence over India, Israel, and the UAE and shares many common interests that facilitated the formation of the Mid- East Quad.

In a cooperative set-up, the four nations have put their synergies together with the UAE having the capital, Israel and the US having the technological edge, and India having the manufacturing and execution capabilities.

However, the primary reason for the creation of the Mid-East Quad is to meet challenges from China which is not just military but political and economic as well.  The US is now actively involved in responding to China’s challenge in multiple regions and the formation of the Indo-Pacific Quad and AUKUS and the Mideast Quad is the chain reflective of this fact.

Both Indo-Pacific Quad and the Mid-East Quad are a reflection that the U.S. is gearing up for a broader struggle with China and looking for partners that go beyond meeting China’s direct military pressure.

India too wants to contain China and is a partner to the US and others in the Indo-Pacific Quad. The Mid-East Quad connects New Delhi with Israel UAE and the US the key nations on its western front i.e. the gulf region.

The curious fact is China’s relationship with both Israel and the UAE had been growing even though both are close U.S. allies. The broader expansion of China’s political and economic influence in the Gulf region has made both Israel and the UAE albeit the US pressured to join the Mid-East Quad. They are also discussing political cooperation in the region on many global issues including having maritime cooperation.

However, the formation of the Mid-East Quad has non-security reasons as well. The Mid –East Quad countries are working together more closely on economic growth and discussing future opportunities for expanding economic cooperation through trade. The Mid-East Quad also seems to lay emphasis on climate change and Covid-19 and a common thread among them is people-to-people ties in technology and science.

This is reflected in the setting up of two working groups, one on religious coexistence apparently to mellow down the Israel-Palestine conflict, a UAE’s idea, and on water management and energy cooperation an Israeli idea.

In a kaleidoscopic strategic environment, India is situated in the middle of the Indian Ocean with its sea borders opening to the two areas that can bridge them in association with the US. India is likely to be a restraining force in the Mid-East Quad and is less likely to get too deep into local rivalries, focusing on cooperation in areas like; energy, health, economics and climate change, etc.

This is because the geopolitical situation in the Middle East is a web of complexities. The UAE is a close ally of Saudi Arabia, but the does not have diplomatic relations with Israel. Inevitably, any cooperation of the four countries of the Mid-East Quad may include Saudi Arabia as the unseen guest. But any such happening will jeopardize Saudi Arabia’s leadership role in the Islamic world.

And there is the Turkey factor where Ankara is trying to emerge as a rival center of political Islam reclaiming the pre-World War I role as the Caliphate. As a result, Saudi Arabia and Turkey’s rivalry continue.

The conflict in Yemen sees the UAE and Saudi Arabia ranged on one side supporting the government there, while Qatar and Iran are backing the Houthi rebels in the ongoing civil war.

The UAE and Saudi Arabia have a measure of hostility towards Qatar, so is Israel that too has similar complaints about Qatar. Then there are the conflicts in the region like in Syria, which is supported by Russia and Iran but opposed by the US and Saudi Arabia.

India has stayed aloof of the conflicts trying to maintain some neutrality keeping bridges to Iran, Qatar, and Iran.

Even though the Mid – East Quad recognizes that regional security has become ever-more complex, that’s testing all the countries individually and together in such geopolitical environment promoting the free, open, rules-based order, rooted in international law among the countries may be a tall order.