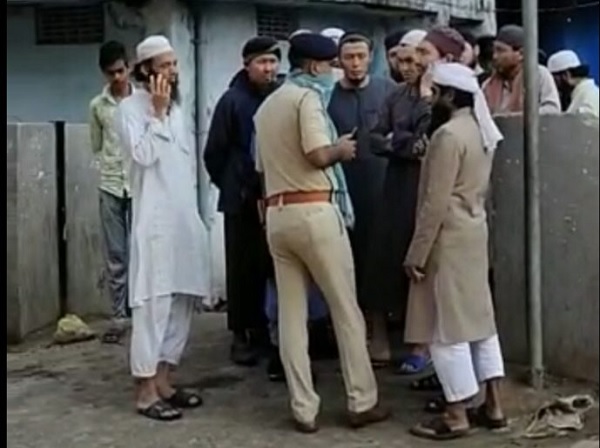 Mumbai : Written by Maulana Mahmood Daryabaadi , Member All india Muslim Personal Law board has shared “the coronavirus infected a famous scholar of Deen in Muslim crowded area of Mumbai. he was admitted in hospital and his entire family was quarantined.Pray for them, may Allah cure him and all patients. The name of scholar and place were not mentioned so that panic does not spread.

Thus, it was informed that a big number of people are not taking this sickness seriously, they are gathering in territory and section of area and they are standing together at (Nukkad) side of street.

Just imagine, if this disease spreads in these Muslim crowded areas, won’t the little resurrection be established!

That is why O people, be merciful toward yourselves and the creature of Almighty and act upon the guidelines, don’t exit from your homes, help the government in this difficult time.

Understand the curfew has been imposed in Maharashtra, be alert, this is not Janta curfew, but it is real curfew.

No more seriousness has been seen as the shops are open as many as they used to be open in past in the big area of Mumbai and Thane as Madanpura, Bhindi bazar ,Mumbra, Mira Road, Govandi etc but the number of people are more than they were before because they are free, the people of Tableegi Jamat are not refraining from Gasht.

Indeed, at the present time to save health is essential as much as to make mosque inhabited and to be against Shirkiya deeds.

Surely mosques are not closed yet, so that people do not develop negative sentiments. But now the situation is very bad, mosques should not be opened for unknown people it should be specialized for Imaam, Moazzin and their staff to pray. People should be strictly told that they have to pray in their homes.

Understand, the people who say that the shaking hands is Sunnah, they are wrong that the shaking hands is Sunnah in this situation in which sickness is spreading. Amr b. Sharid reported on the authority of his father that there was in the delegation of Thaqif a leper. Allah’s Apostle (ﷺ) sent a message to him:We have accepted your allegiance, so you may go.  Reference: 2231

And the people who say that there are not strong in Imaan, they say wrong,

And the people who say we trust in Allah and carefulness is not necessary they say wrong .

The people who say, if something has to happen, it will happen, our Imaan is strong they are wrong, because Hazrat Umar may Allah be pleased with him didn’t come into syria in which sickness has spread, and whose Imaan, Taqwa, and Tawakkul is stronger as Hazrat Umar whereas they say, execute me and shoot me.

all scholar of all school of thought decided that should stay at home, pray in home, don’t create the situation of picnic and holiday, and do what you can do so that

Allah is our helper and protector.

nextAre you Distributing Death in the Shape of Relief?