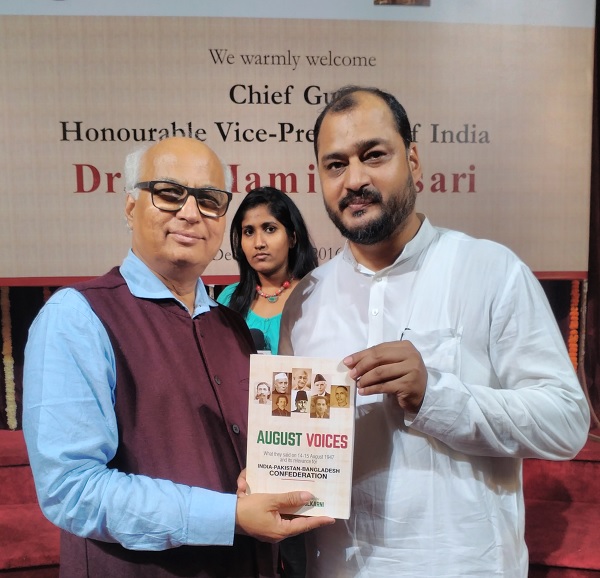 In an exclusive interview with Anadolu Agency, author and strategist Kulkarni, who worked as a close aide of former Prime Minister Atal Bihari Vajpayee and his deputy Lal Kishan Advani blamed the ruling BJP followers for orchestrating riots in the capital city of Delhi during the visit of U.S. President Donald Trump.

Sudheendra Kulkarni (SK): The root cause of these clashes was the recently enacted citizenship law, known as the Citizenship Amendment Act (CAA). It discriminates based on religion in the matter of granting citizenship to people coming from Pakistan, Afghanistan, and Bangladesh. The government of Narendra Modi also announced that it would implement the National Register of Citizens (NRC) all over the country. NRC is meant to detect and deport foreigners illegally residing in India. An earlier exercise of preparing an NRC in the north-eastern state of Assam, which borders Bangladesh, had created anxiety among hundreds of thousands of people, both Hindus and Muslims, that they would be rendered stateless. But the enactment of CAA gave relief to Hindus while creating panic among Muslims in India that many of them, or their co-religionists, would be deprived of their Indian citizenship.

For over two months now, Muslims, joined by large numbers of Hindus, Christians, and Sikhs, have been protesting peacefully against CAA and NRC all over the country. The size of these protests is unprecedented in the history of independent India. The ruling BJP did not expect such sustained and peaceful protests. The BJP has been practicing politics of religious polarization for staying in power. However, the BJP badly lost the elections to the legislative assembly in Delhi, held in February this year. Out of frustration, followers of the BJP incited communal riots in Delhi during the official visit of the U.S. President Donald Trump.

Q: Since you have worked with former Prime Minister Vajpayee’s team, who was also from the BJP, what difference do you find between the approaches of two prime ministers?

SK: The BJP under the leadership of current Prime Minister Narendra Modi and Amit Shah (India’s home minister) is very different from the BJP under the leadership of Atal Bihari Vajpayee. As someone who worked as Vajpayee’s aide for six years (1998-2004), I have no hesitation in stating that Vajpayee sincerely believed in Hindu-Muslim harmony and strove for India-Pakistan peace.

Q: Since you were privy to things unfolding during the 2002 Gujarat riots, why they could not be contained immediately?

SK: Yes, I agree that the 2002 communal riots in Gujarat should have been contained with firmness and promptness. There were differences between Vajpayee and Narendra Modi, who was then the chief minister of Gujarat. The BJP paid the price for it in the national elections held in 2004.

Q: Communal riots may not be a new thing in India, but in this age of information and social media, what different kind of impact they have on the image of the country?

SK: Undoubtedly, communal riots have negatively affected India’s image globally, including in Muslim countries. In the age of the Internet, information travels very fast and all over the world.

Q: You once said that we must show the courage to look at history truthfully. What is the antidote for ending communal hatred?

SK: I firmly believe that the solution to many problems in India — and in South Asia at large — lie in the truthful understanding of history and in learning from mistakes of the past by both Hindus and Muslims.

Specifically, for ending communal hatred and violence, we need to work on two tasks: Hindu-Muslim harmonization and India-Pakistan normalization. The two tasks are inter-related. Reconciliation between India and Pakistan is absolutely necessary for peace and progress not in the two countries but all of South Asia.

If it is wrong to say that India is a Hindu nation that belongs primarily to Hindus (and hence relegates Muslims to the status of second-class citizens). It is equally wrong to believe that Pakistan and Bangladesh are Muslim or Islamic nations that belong primarily to Muslims (and hence relegates Hindus, Sikhs and other minorities to the status of second-class citizens).

Q: What are the main reasons for rising hate and communal polarization in India?

SK: The reasons are partly historical and partly contemporary. When the British colonial rule ended in 1947, India was partitioned and Pakistan was created as a separate Muslim nation. The birth of Pakistan based on the two-nation theory propounded by the Muslim League was wrong because it insisted that Muslims and Hindus constitute two separate nations and cannot live together. The truth is that, from Peshawar (in present-day Pakistan) to Dhaka (in present-day Bangladesh, which was East Pakistan in 1947), Hindus and Muslims had been living together for centuries.

India’s partition in 1947 was accompanied by bloody communal violence in which nearly a million Hindus, Sikhs, and Muslims were killed. Nearly 15 million people became refugees — with many Muslims from India going to Pakistan and almost all of Hindus and Sikhs coming to India. This was the largest trans-border migration of people in human history. Memories of this dark episode have not yet vanished.

Also, the unresolved Kashmir problem, and the four wars between India and Pakistan, have soured relations between the two neighbors. Sadly, the Islamization of Pakistan, the persecution of Hindu, Sikh and Christian minorities in that country, and the acts of terrorism in India by Pakistan-based groups have created an atmosphere of anti-Pakistan sentiments in India. Hindu communal organizations in India have exploited this to foment anti-Muslim hatred and violence in contemporary times.

In this context, I wholeheartedly congratulate Pakistan Prime Minister Imran Khan’s recent statement that his government would take stern action against miscreants in his country if they harmed minorities in Pakistan as retaliation against anti-Muslim riots in Delhi. “Minorities are equal citizens of Pakistan,” he has said. This is highly reassuring and commendable.

Q; Is there any hope for Hindu-Muslim rapprochement?

SK: Religious freedom and tolerance have been the hallmark of Indian civilization. This is because the message of human equality, mutual respect, peace, and nonviolence has been preached and practiced by countless saints and sages from ancient to contemporary times. Just two names are sufficient to prove the point – Lord Buddha and Mahatma Gandhi. Gandhi was assassinated by a Hindu extremist on Jan. 30, 1948, because of his uncompromising advocacy of Hindu-Muslim brotherhood and India-Pakistan peace.

Even today, a vast majority of Hindus and Muslims in India live together as good neighbors all across India. There are extremist and communal-minded groups on both sides, but they are a minority. Moreover, most political parties in India are wedded to the constitutional principle of secularism. Therefore, I am absolutely confident of Hindu-Muslim rapprochement in India.

Q: What is deterrence against the recurrence of communal riots?

SK: The effective deterrence against recurrence of communal violence in India — or, for that matter, in any multi-religious nation in the world — rests on two pillars. One, the government must be impartial in all its dealings. In particular, the police (also other security forces) and the judiciary must be independent and non-partisan, so that every citizen can feel secure and safe, and expect justice against harm-doers.

The second pillar is social unity among people of various religious and ethnic communities. When communities are united and committed to living together in peace and cooperation, communal forces (Hindu or Muslim) will find it extremely difficult to incite hatred and violence.

Q: You have also propounded that Mumbai can bring India and Pakistan closer with its thriving film industry known as Bollywood and many other things. But over the years Bollywood is also getting hyper nationalistic and adding to polarization.

SK: It is true, and it is very sad, that some people in Bollywood are getting hyper-nationalistic and contributing to polarization. But, overall, Bollywood has rendered immense service to the cause of communal harmony and national integration within India, and propagating humanistic ideals around the world. Even today, three of the biggest movie stars in Hindu-majority India are Muslims — Shahrukh Khan, Aamir Khan and Salman Khan.

Indian cinema is extremely popular in Pakistan, and many great Pakistani poets, musicians, and artists are highly respected in India. To give just one example, in the recent anti-citizenship law agitations all across India, one protest song that has become immensely popular is by Faiz Ahmed Faiz, who was one of the greatest Urdu poets of Pakistan. Therefore, I am highly optimistic about the power of Bollywood to bring India and Pakistan closer.

Q: Prime Minister Narendra Modi began his era with promises on the economy, diplomacy, digital India, clean India. Why he felt need to patronize right-wing fringe for electoral gains instead showing achievements on the economic front?

SK: I agree. Prime Minister Narendra Modi was fortunate in winning historic mandates in 2014 and 2019 parliamentary elections. With such popular mandates, he could have given leadership to India’s march towards accelerated and inclusive development on all fronts, especially in eliminating poverty and backwardness which blight the lives of millions of Indians. He did not need to rely on the politics of polarization.

nextIf you don't have compassion for yourself, don't do injustice to others