Opinion: The significance of Halal meat 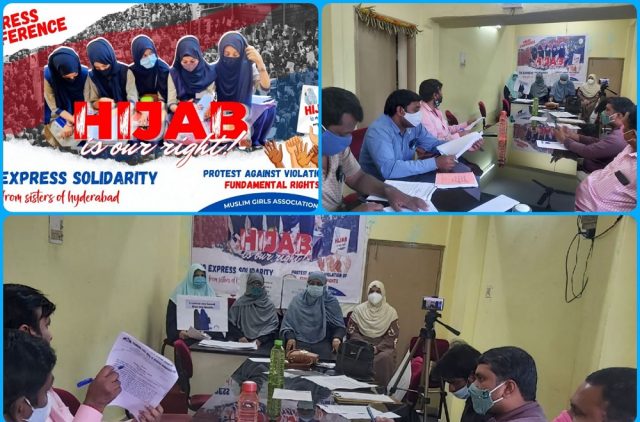 By Pervez Bari
BHOPAL – Muslim girls and women of Hyderabad have vehemently condemned the Udipi College administration in Karnataka state which is not allowing Muslim girl students to attend classes because of wearing Hijab.

“We strongly condemn the policies and practices of right wing forces where they are creating a communal environment and unsafe atmosphere for Muslim Minorities especially Muslim Women”, they said at a joint Press Conference in Hyderabad on Saturday.

The joint Press Conference was organised under the banner of Sharia Committee for Women in coordination with Muslim Girls Association and Muslim Women Association.

They expressed solidarity with Muslim girl students of Udipi College and appeal to the college management to allow them to attend classes. They urged Muslim girls of the college to struggle in a democratic way for their rights.

Oppression of Minority Rights
Raising their voice they said: “After the Bulli App, Sulli Deals and Clubhouse attacked Muslim women now the Karnataka College administration is indulging in such acts, which is nothing but Oppression of Minority Rights. The Constitution of India allows and permits each and every individual to follow his or her own faith. This Oppression is designed to alienate Muslim community from Education and reduce them to second class Citizens”.

The rise of Hindutva Right Wing forces and present Government have created an atmosphere of hate and communal disharmony in some states with specific targets of Muslim girls and women, they alleged.

They have appealed to the National Commission for Women, Women’s Human Rights Cell in NHRC (National Human Rights Commission), advocates, judges and intellectuals of the country to raise their voices against communal agenda of the saffron forces. This anti-Muslim hate campaign is damaging the image of this great nation globally. Many experts are warning regarding genocide of Muslims which is an alarm bell, they added.

On one side the present Government claims to bring reform in Muslim community by bringing law against Triple Talaq while on the other hand Education is being denied to Muslim girls in government colleges for wearing Hijab, they charged.

The National Education Policy (NEP) focuses on imposition of practices which are of one particular religion and many Muslim Students are forced to perform Yoga, Surya Namaskar and other such religious activities in educational institutions. In the name of culture majority practices are imposed on Minority students this is nothing but oppression and against the Constitution of India, they pointed out.

India is a Secular Democratic country inhabited by different faiths and religions since ages. The customs, traditions and rituals of India have never been a cause disunity and conflict. The Constitution of India guarantees Rights of Freedom of Religion and Choice to all citizens irrespective of faith colour or creed, they asserted.

However, they moaned the Media houses, Television channels and Social media platforms are continuously spreading hatred against Muslims and Muslim girls and women are targeted making them vulnerable to crimes against women.

They appreciated and praised all Chief Ministers who have taken measures for establishing justice and equality and protection of Rights of Minorities and stopping anti-social elements in different states. They requested all State Governments and Central Government to take immediate steps to stop this “Campaign of Hate”.