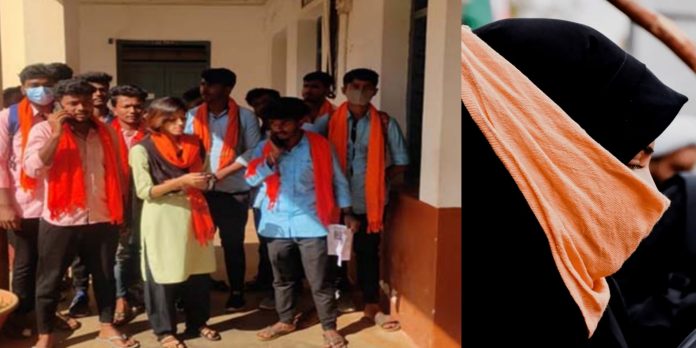 CHIKKAMAGALUR:  The saffron shawl versus hijab row ended at the Balagadi First Grade College in Koppa taluk of Chikkamagalur district in Karnataka as students and parents called a truce and agreed not to wear either a hijab or a saffron shawl along with the uniform to the college from Tuesday.

However, the girls will be allowed to wear veils on the face. The decision was made at the parents meeting held in the college.

Principal S. Ananth addressing the meeting stated that a similar controversy erupted in 2018. Then, a decision was taken to only cover the face with a veil. This time also consent has been taken from all the parents and a decision on veils has been taken.

The college authorities will take strict measures to see that students do not violate discipline on the campus. He also warned that if any student violates the decision taken in the meeting, their parents would be called and they would be issued a transfer certificate.

MLA Raje Gowda, who also attended the meeting, said the students must maintain discipline on the campus. The behaviour should not be provoking and students must focus on studies and follow the decision taken at the meeting.

The students last week staged a protest by boycotting classes for allowing some of the students to wear a hijab. The students said that uniform norms were violated by some students who wear a hijab along with the uniform. If they are allowed to wear hijabs, then they must also be allowed to come with saffron scarves and shawls, the agitating students demanded.

nextCommunal Violence in the Year 2021