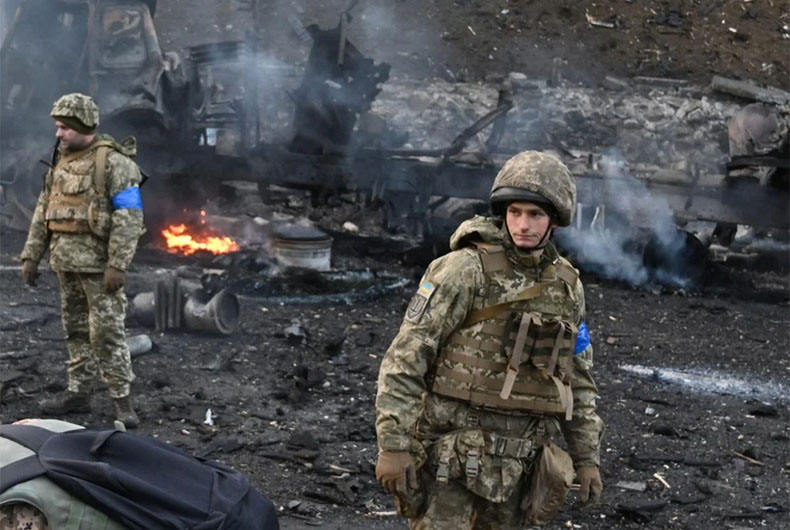 Like most Americans, Indian-Americans have been horrified by Russia’s invasion of Ukraine in February

Washington: Indian-Americans plan to issue a forceful denouncement of Russia’s invasion of Ukraine in an attempt to shield themselves from the fallout of the Indian government’s continued refusal to condemn the war, which has drawn widespread scrutiny and criticism from within and out of US policy circles.

A bipartisan group of well-connected Indian-American political operatives is considering to hold a seminar on Capital Hill on theme of “Indian Americans Against Genocide in Ukraine”, one of the organisers said. June 22 is the tentative date being considered and the event is likely to be headlined by a leading yoga guru and attended by many US lawmakers.

Indian-American speakers could include the four serving members of the US House of Representatives Ami Bera, Pramila Jayapal, Ro Khanna, and Raja Krishnamoorthi, all of whom have been extremely critical of the Russian invasion and both publicly and privately critical of India’s refusal to condemn it.

Politically-active Indian-Americans have been a key driver of the India-US relationship. They helped soften American backlash against India after the 1998 Pokhran II nuclear tests and, most significantly, rallied US lawmakers to pass a legislation that ended India’s nuclear isolation in 2008.

They have stood with the Indian government of the day in a notable display of bipartisan solidarity with their country of origin. And Prime Minister Narendra Modi has been popular with both Republican and Democratic Indian Americans. For the community to break so publicly with his government’s position on Ukraine should cause concern at 7 Race Course Road.

Like most Americans, Indian-Americans have been horrified by Russia’s invasion of Ukraine in February and have been appalled by images of death and destruction coming out of the battle-ravaged country.

They have also watched with growing disquiet the Modi government’s refusal to condemn the invasion and bristle at having to “either defend it or face scorn for it”. One Indian-American said he was asked by a Pennsylvania party official recently, “Why is India supporting the Russians?”

India is not supporting the Russian invasion. While it has refused to condemn it outrightly, it has made clear its opposition to it. New Delhi has called for the immediate cessation of hostilities and that the sovereignty and territorial integrity of nations must be respected. But all of that has been obscured by India abstaining in critical UN votes on the war.

“What the Russian Army has been doing in Ukraine is downright genocide,” said Shekhar Tiwari, a Republican operative who is also chairman of the American Hindu Coalition. He has been a close associate of several top BJP leaders. “Being a Hindu and a son of a Gandhian, it is hard for me to stomach,” he added.

These Indian-Americans are careful not to criticize the Indian government and insist they only want to express their horror over situation in Ukraine, which they described as a “genocide”, as has US President Joe Biden.

They have been concerned about the blowback they are getting for India’s position on the war and believe a public denouncement of Russia will, one, make clear the community feels as revolted as the rest of the country. And, two, that the community is “not in the pocket of the embassy”, as one these Indian-Americans put it.

Breaking with the Indian government over the Ukraine war will serve the twin purposes of signalling their own independence from the government of India and, two, convey their own feelings on the issue.

Some Indian-Americans have also argued, since Russia invaded Ukraine in February, India needs to denounce Moscow and finally pick a side that will be strategically more meaningful.

Ramesh Kapur, a Democratic strategist who worked closely with the presidential campaign of Biden, says India’s refusal to condemn the Russian invasion could be problematic should it need US assistance in a conflict with China. “If India gets into a situation with China, it can expect support from the US, but if the US thinks it cannot count on India they will have a problem,” he said, taking a tactical view of India’s position, as has been put forth by many US lawmakers.

Congressman Khanna told Fox News in March that he thinks India “ought to be condemning Putin” and “they need to realize, they have to pick sides”. He had added: “We, the United States, were with them when China invaded India. Putin wasn’t there. And it’s time for them to buy weapons from the United States, not Russia. We’ve got to look at how we can facilitate that and make that easier. We need India as an ally ultimately to contain China.”