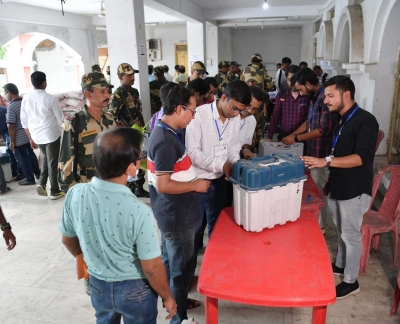 The last-minute preparations were underway on Wednesday for the politically crucial by-elections in four assembly constituencies in Tripura, scheduled to be held on Thursday.

Agartala, June 22 ,2022: The last-minute preparations were underway on Wednesday for the politically crucial by-elections in four assembly constituencies in Tripura, scheduled to be held on Thursday.

Central and state security forces were deployed ahead of the vital by-elections being termed as ‘semi-final’ before the 60-member Tripura assembly’s general elections which are around 8 months away.

As the BJP, CPI-M-led Left Front, Congress and the Trinamool Congress and other local parties put up their candidates, the by-polls would be multi-cornered.

In all, 1,89,032 voters would decide the political fortune of 22 candidates of the BJP, CPI-M-led Left Front, Congress and the Trinamool Congress, and other local parties.

The over-a-month-long hectic poll campaign for the four assembly seats in Tripura ended on Tuesday while a tense situation prevailed in some areas of these poll-bound constituencies.

The campaign was marred by violent incidents. Former BJP minister Sudip Roy Barman, who is now contesting from the Agartala constituency on a Congress ticket, was injured when “BJP activists” allegedly attacked him late on Sunday night. Barman, a five-time MLA from the politically crucial Agartala constituency, is now under treatment at a private hospital in Agartala.

The focus of the by-elections was on the Town Bordowali Assembly constituency, where 69-year-old Congress-turned-BJP leader and Chief Minister Manik Saha is contesting against five other candidates.

Saha, the state party president and a Rajya Sabha member who assumed office on May 15, a day after Biplab Kumar Deb’s resignation from the top post, is contesting the elections for the first time.

To fulfil the constitutional bindings, he has to become a member of the Assembly within six months. The by-polls were necessitated after the resignation of three BJP MLAs and the death of CPI-M legislator Ramendra Chandra Debnath.

Amid open resentment among a section of BJP legislators against the then Chief Minister Deb, three MLAs — Sudip Roy Barman (Agartala), Ashish Kumar Saha (Town Bordowali) and Ashis Das (Surma) — quit the BJP and the Assembly.

He passed away on February 2 in Kolkata due to kidney failure. The votes will be counted on June 26.

previousBundelkhand Expressway to be ready next month