Ministers to go abroad to prepare ground for UP global summit 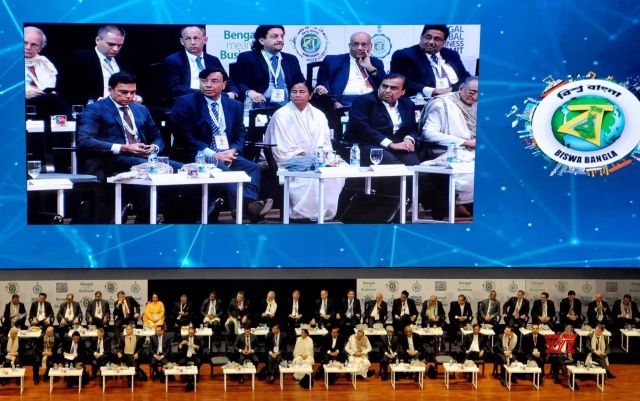 Kolkata : Amid slower economic growth in the country and the ongoing stand-off between the Centre and the state, the Mamata Banerjee-led West Bengal government will kick start the fifth edition of annual two-day business summit on Thursday.

While any list of Indian business captains likely to grace the Bengal Global Business Summit (BGBS) 2019 is yet to be formally announced, it may see participation from over 36 countries.

To shed the state’s investor-wary image and woo much-needed business capital, the state government has prepared a list of 150 investable projects, representing around $17.8 billion opportunity in West Bengal.

The state government has reached out to various states and even foreign countries in the run-up to the event, to be held at the Biswa Bangla Convention Centre in Rajarhat, Kolkata.

To ensure a strong foreign imprint, the state government organised a series of interactive sessions on business opportunities in Bengal in Frankfurt (Germany), and Milan (Italy) in October 2018. High-powered official and business delegations have also visited many other countries.

“Italy, participating as a partner country for the third time in a row, will be represented by Italian Ambassador Lorenzo Angeloni. This year the number of Italian delegates are expected to exceed the last year. Delegates from Lombardy and Caserta in Italy are also participating this year,” said Damiano Francovigh, the Italian Consulate General to Kolkata.

According to Bengal Finance, Commerce and Industries Minister Amit Mitra, there would be thousands of delegates at the plenary session, including a strong presence from countries where manufacturing units are strong.

“Last time, we invited them but they did not come. This time, we have invited Union Commerce and Industry Minister Suresh Prabhu and he has sent a video messages wishing the success. We want to work together. Government to government work is different and it is a constitutional obligation,” state Chief Minister Mamata Banerjee told reporters at the secretariat-Nabanna.

Banerjee has been accusing the Centre of attempting to destroy federal structure of the country. She has been vocal against demonetisation and implementation of the Goods and Services Tax (GST) by the central government “without enough preparation”.

To turn things around in terms of investment, she has appealed to industrialists time and again to infuse investments in the state to meet the huge demand for jobs.

The Chief Minister also tom-toms the state as a zone of “industrial peace” where not a “single manday” is lost due to industrial disputes, and gateway to North-East India and South-East Asia.

To attract investment, this year’s summit would focus on priority areas like agri business, IT & ITes, MSMEs & skills, hospitality & tourism, logistics & transport, and infrastructure. The sessions would include sector-wise discussions to project possibilities and potential of Bengal.

According to the state government officials, the four chapters of the summit have witnessed “overwhelming response from the business community receiving $145.93 billion business proposals from varied sectors”.

Later in the evening, Banerjee said there were over Rs 10 lakh crore of investment proposals, received by the government and out of this, over 50 per cent is “under process” of implementation.

She also alleged that “whatever announced in the Gujarat’s business summit is not being implemented”.

previousSensex closes 358 point up on hopes of rate cut