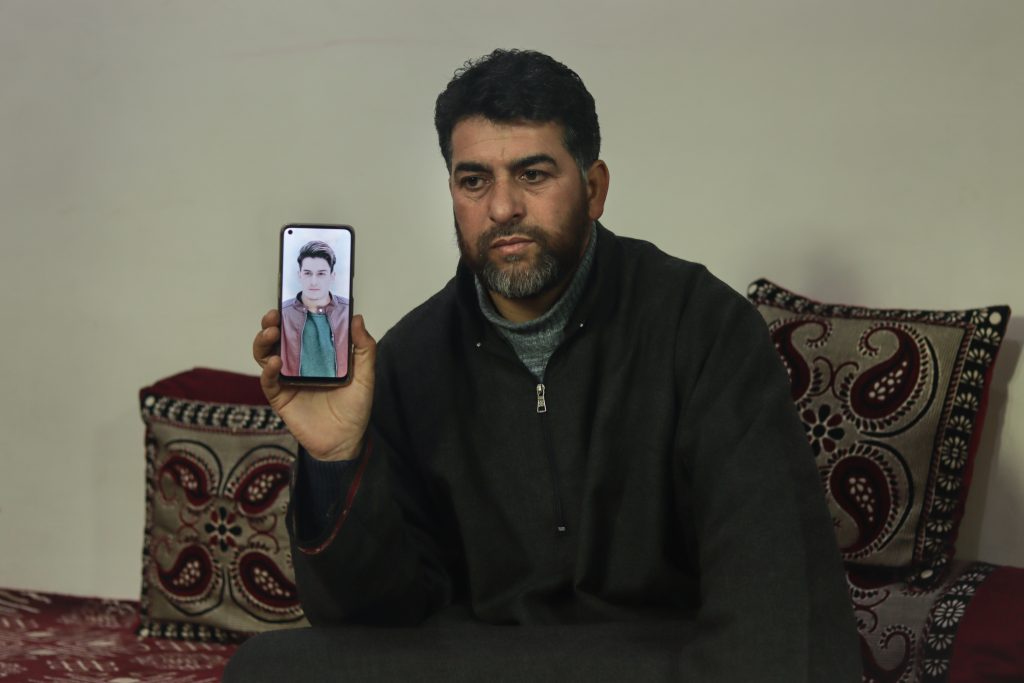 “I didn’t get his body but I just had his shoes for the burial”, says Athar Mushtaq’s wailing father Mushtaq Ahmad Wani, who is waiting helplessly and desperately for his son’s body since 2020 December.

16-year-old and 11th Class student Athar Mushtaq along with Zubair Ahmd and Ajaz Ahmad were killed last year in December in an encounter in Srinagar’s Lawaypora area, 40 km from his home. Following the killings, Jammu and Kashmir buried the trio in Sonamarg, more than 140 km away from their hometown despite families’ urge for the bodies of their kin. A policeman’s son was also among the three killed.

Mushtaq Ahmad Wani, 42, said that the trio were picked up from different locations, killed in Lawaypora in a staged encounter.

“According to police it was an eighteen-hour long encounter and I wasn’t called a single time as they do in other encounters. There was not even a single case registered against him. My son was never arrested,” Wani added sounding desperate to see his son’s body.

The police in the Valley had promised for a proper inquiry in the case but failed to provide evidence of Athar being involved in any militant activities, alleged Wani. “Police had said that it will take 10 days to prove my son guilty but they failed miserably to do so,” he said to Maktoob.

“While his body was at the police control room in Srinagar, I asked them at least give me his clothes back, his phone, and Id cards, but they refused. Don’t I have a right on my son’s belongings?” asks Wani.

Even in wars,  the bodies and belongings are returned to the families but not in Kashmir, he said.

When being asked about the memories of his son, Wani said that “it’s hard to believe that I have lost my only son, whenever there is any news of encounter in Kashmir, the memories of the tragedy tear us apart, I think of that moment when my son was in the middle of completing his 11th class exam, and they picked up and killed him, those memories will haunt me always.”

“Being my only son, I had hopes on him, he was becoming a responsible boy. While I was out for some work, he would always handle the household chores. It has been almost 11 months, I had thought this burden will leave me with time but I still hear him everywhere, his mother and sister are suffering from mental trauma since then, my life is on wheels always, moving from one doctor to the other for his ailing mother” with tears in eyes Wani described.

Earlier this year Wani along with 6 of his relatives were booked under draconian UAPA (Unlawful Activities Prevention Act) for protesting and demanding the body back.

“They have been threatening me saying, whenever I demand my son’s body again they will put me behind bars for 7 years,” the father of the deceased told Maktoob.

“It’s hard for me to visit Sonamarg even after months and it’s hectic because of a lot of security and CCTVS surrounding his grave, I just want to visit him twice or thrice in a week which is only possible when he is buried here and it will lower my burden,” said Wani.

Last week, the Kashmiri families and activists had raised questions on the killing of four people, including two civilians, during a gunfight with suspected rebels in a shopping complex in Srinagar. The bodies of the four people were hurriedly buried by forces, as part of the recent practice of denying bodies of suspected rebels or their alleged “associates” to their families for burial. While as the families of the deceased disagreeing with the police claims protested for 2 days and the bodies were exhumed and returned.

It brought hope to Wani as if his son’s body was returning too. Following that Wani uploaded an emotional video in which he was seen urging and requesting Lieutenant Governor Manoj Sinha to intervene and help him get Athar’s body back.

“I had requested them last year that please give back the dead body, it’s a right of the family. I don’t need any investigation in the case, I just want my son’s body back, it becomes hectic at times to travel such a faraway place and then, they don’t let you in and at times not without frisking,” Wani said to Maktoob.

Last year, Wani had dug up a grave in his ancestral graveyard by himself at Bellow village of Pulwama.

While being asked about the grave, he said with his tearful eyes that he has put his hopes on Allah and it is still open and Athar’s body will soon return.

“I will wait, and keep on waiting until my death, I don’t care whatever happens to me. I just need justice and justice for me means getting my son’s body back home.”