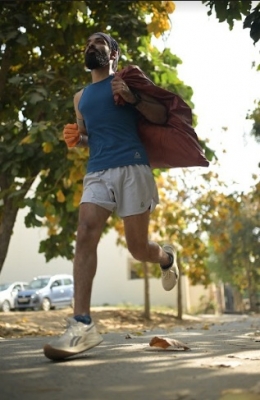 “If people are littering in front of you, nobody asks any questions. But if you are picking up the litter, people will ask you why? Nobody questions the wrong doing. That was a big eye-opener for me.”

New Delhi, 4thJune 2022: “If people are littering in front of you, nobody asks any questions. But if you are picking up the litter, people will ask you why? Nobody questions the wrong doing. That was a big eye-opener for me.”

That is Ripu Daman Bevli, who most sports lovers know as a marathoner / ultra-marathoner. But with such probing thoughts and a zeal to keep both him, and the planet healthy, Bevli has added yet another feather in his cap.

He is one of the change makers that are going to be featured by National Geographic in phase two of their inspiring series from Sunday.

Bevli, the ‘Plogman of India’, has been plogging all over the country with his ‘Litter Free India, the Kuda Mukt Bharat’ movement.

It started in 2016 with Bevli plogging — picking up litter while jogging — after his run in the morning. Soon, it became an Eco Fitness movement as his friends and fellow runners started plogging too.

“Random strangers would ask why I was doing this. Even my close friends said I had lost it. If people are littering in front of you, nobody asks any questions. But if you are picking up litter, people will ask you why?”

“Government later adopted our Mission under the Fit India movement. On October 2, 2019 — Mahatma Gandhi’s 150 birth anniversary — close to 40 lakh people participated in it,” he said.

An important insight, Bevli shares: “We will never be able to clean up our world by cleaning up. We will have to stop littering. Most recyclable waste is actually not going to be recycled, and because it is littered, it is muddled with impurities. That is the elephant in the room,” he said, adding: “Our focus therefore is on awareness about ‘refuse, reduce, reuse and recycle’.”

Spotlighting the stories of such change makers, of hope and efforts to make the Earth a better place to live in, National Geographic had launched its mega influential campaign titled — ‘One For Change’ on Earth Day last month, i.e. April 22. Post the success of the campaign on Earth Day, National Geographic is now all set to take the initiative to its next phase to celebrate World Environment Day, primarily focusing on the stories of change makers from the environment space.

Apart from Bevli, the series will feature Ramveer Tanwar, a wetland champion who left his corporate job to revive dried up ponds and water bodies; Ribhu Vohra, educator, plastic waste activist & NatGeo explorer working to create the next generation of plastic warriors by educating millions of students through innovative and creative learning, and Mansukhbhai Prajapati, the famous rural innovator and owner of Mitticool, a low cost, biodegradable clay innovations, including a clay refrigerator.

The change makers also include Anshu Gupta, social entrepreneur and owner of Goonj that has transformed urban discards into usable resources for the underprivileged; Sneha Shahi, a UNEP Plastic Tide Turner, who cleaned up a stream in her hometown resulting in return of crocodiles in the waters, and Priyadarshan Sahasrabuddhe, who invented ‘Vaayu’, a machine that converts organic waste to clean fuel.

“The short films will spotlight various change makers from across the country who are working hard to restore and preserve the environment, while also constantly encouraging the people of our country to do their bit. The series will feature the change makers who will narrate their stories in the most non-traditional way to break the monotony attached with environmental stories and will aim to create an effect on the viewers’ mind to move them and make a difference in the society,” a NatGeo official said.

(Nivedita Khandekar can be reached at nivedita.k@ians.in )

nextMore cruise players to operate from TN after Cordelia