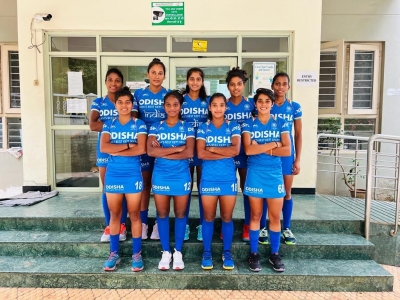 Indian women’s hockey team went down 3-4 to Uruguay in their opening match, and then lost 1-3 to Poland in the FIH Hockey 5s 2022 at the Place de la Navigation Stadium here on Saturday.

Lausanne (Switzerland), 4th June 2022: Indian women’s hockey team went down 3-4 to Uruguay in their opening match, and then lost 1-3 to Poland in the FIH Hockey 5s 2022 at the Place de la Navigation Stadium here on Saturday.

India began the match strongly as Ajmina Kujur put India in front 30 seconds into the match. Uruguay captain Teresa Viana scored the equaliser straightaway to make it 1-1. Manuela Vilar put Uruguay in the lead a few minutes later, but their lead did not last long as Ajmina Kujur scored her second goal in the match to level the scoreline again. But Uruguay took the lead before the end of the first half as Teresa Viana scored her second goal of the match.

Showcasing urgency to get back on level terms, India pressed deep inside Uruguay’s half straightaway in the second half. India women’s hockey team reaped rewards for their tenacity as Vaishnavi Vithal Phalke struck the ball from a distance to level the scoreline. Just at the stroke of the final whistle, the Uruguay captain Teresa Viana pumped up a long shot into the nets to get her hat-trick in the match and help Uruguay pick a 4-3 win, Hockey India informed in a release on Saturday.

In the second match of the day, Rashmita Minz (6′) scored the sole goal for India women’s team, while Poland captain Monika Polewczak (16′), Amelia Katerla (18′), and Natasza Suszynska scored the three goals to help their team pick up the win.

India began cautiously against Poland and started stitching passes to create danger inside the opposition’s half. Captain and goalkeeper Rajani Etimarpu made a stunning save to deny Poland a chance to take an early lead. Minutes later, Rashmita Minz put India in the lead with a shot from near the halfway line. India kept up the pressure on the Polish defence as the first half ended with India ahead by a goal.

Trailing by a goal, Uruguay started threatening moves inside India’s half, but India captain Rajani Etimarpu continued to stand tall to deny the equaliser. Mumtaz Khan received a chance to double India’s lead from a rebound, but Polish goalkeeper Anna Gabara made the save.

India will take on Switzerland in their next match on June 5 and then meet South Africa later in the day.