Muslim NGO helps to bury or cremate over 2,170 Covid victims 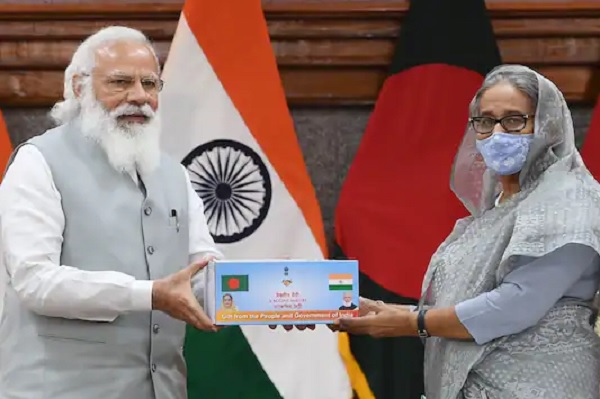 Before the external ramifications of politics on internal politics are to be understood it can be trailed to India’s PM Narendra Modi visit to Janki temple in Nepal on May 11, 2018 while the state assembly polls in Karnataka were underway and Modi through his televised visit campaigned for BJP despite the moral code of conduct in place. The same he did while on his two-days (March 26&27) tour to Bangladesh as he visited Kali temple while West Bengal and Assam blazed through their first phase of assembly elections.  No wonder West Bengal CM Mamta Banerjee has sought for the cancellation of Modi’s Visa for indulging in vote-marketing.

It may be known that from quite prior to his proposed visit Bangladesh was on the boil as protests had broken to not to invite Modi for his anti-minorities ( read Muslims) politics in India with particular reference to the controversial CAA and NRC and four people died protesting Modi’s visit. But, Modi modeled himself on the dress code of the founding father of Bangladesh Sheikh Mujib-ur-Rehman i.e. in the traditional  black waist-coat and white kurta-pyjamas, on the occasion of the 50th anniversary of Bangladesh  where  he gave a posthumous Gandhi Peace Price 2021 to Sheikh Sahab. What however disturbed the applecart is that as Modi spoke Pakistan PM Imran Khan invited Bangladesh PM Sheikh Haseena to Islamabad, according to Geo Tv, which obviously took the Indian establishment by surprise. Therefore, as Modi was busy lambasting Pakistan for its role in 1971 towards which Modi had even gone for a jail too an invitation to Sheikh Haseena from its once bête noir was in the offing.  India and Bangladesh signed five MoU’s with nothing worthwhile to the vexed issue of Teesta waters.

It can be anyone guess that Mod’s strategy was to offer trade and sorting out border-issues with Bangladesh with ‘all kinds of perks’ in lieu of Bangladesh distancing itself from China and moving towards US.  In fact the same package was the one offered by US to Pakistan to leave China-Pakistan Economic Corridor but for which Pakistan did not relent.  Quite understandably Bangladesh does not seem to outweigh China in favour to  India while also keeping its relations ‘well’ with Pakistan too, which no doubt is a consternation to New Delhi.  It would be therefore be appropriate to mention that in the recent face-off between China and India Bangladesh had chosen not to side with India. Bangladesh is very soon slated to acquire two-submarines from China as well as nuclear power plants from Russia which surely is a message to India to no more consider Bangladesh as an easy walk.

Meanwhile, it is also learnt that while Modi was in Bangladesh the Indian army chief MM Naravane did acknowledge that there has been a de-escalation in the situation between India and China at LAC, yet there are images that China has started to built posts in Sikkim! Perhaps, it is China which is calling the shots as it first ‘lowered the scales’ on the Indian front, and which immediately led to Pakistan army chief Qamar Javed Bajwa calling for ‘peace with India’, prompting Modi to write to Imran Khan on the occasion of Pakistan-Day. May be very soon Modi may be visiting Pakistan too and both the countries might accede to General Musharraf formula and borders between both sides of Kashmir may become irrelevant and the issue of Kashmir may be buried forever.

How Bangladesh wants to capitalize with China instead of just ‘talk’ from India, is the boost Bangladesh is set to get from the 97% Bangladeshi products duty-free-access to China, and no doubt that Bangladesh’s highest imports are from China whereas Bangladesh still lags behind manifolds in terms of exporting goods to China, which is what China wants to improve. Such measures are however yet to find any resonance on the India-Bangladesh front.

Bangladesh is gravitating towards Pakistan at the behest of China and Bangladesh becoming a part of Chinese Belt of Road Initiative is now a foregone reality. Modi therefore chose to use diatribes against Pakistan while in Dhaka and in his address lauded the Indian army officials like Sam Manekshaw, General Arora etc to ridicule Pakistan but today Dhaka seem to steer clear of India vis-à-vis its relations with Islamabad.  This is a clear knockout from Pakistan as an invitation to Sheikh Haseena while Modi was loathing Pakistan is sure to have upset the equations which New Delhi wanted to forge with Dhaka at the cost of Islamabad.

What will therefore be the agenda from Pakistan when Sheikh Haseena is to visit Islamabad? China has already set the tempo for it. China will make Bangladesh join Pakistan at Gwadar port, towards which soon Bangladesh will shortly play a cricket match with Pakistan and China would also make Sri Lanka join the fray.  May be soon a Pakistan-Bangladesh-Sri Lanka cricket tri-series is on the cards.  A cricket match in the international stadium at Gwadar, which is as scenic as a La Newzealand will be a sure spectacle to watch. Gwadar port in the tail-end of CPEC from which Chinese goods are to reach Mediterranean, US and European markets. China is also laying a railway track worth 7.2 billion USD from its Kashgar province to Gwadar.

Bangladesh is now all set to become a part of CPEC and shed its inhibitions with its erstwhile counterpart as the world scenario has rapidly under changed in recent times. Soviet Union which was broken by Pakistan’s help to Afghans is today a friend of Pakistan and India which remained in Soviet Bloc for more than 50 years is in US bloc.  How the politics is to groove on international scale is for the time to see but Modi did use Bangladesh to bolster his party campaign in the on-going elections in Assam and West Bengal where there is a sizeable Bengali speaking people who are facing the dread to be deported back, on his purported first foreign visit after the outbreak of the pandemic COVID-19.

The writer is a former State Information Commissioner, India.

previousThe cause for the downfall of Muslims in today’s world

nextSmooth Sail of Suez Canal Down the Ages