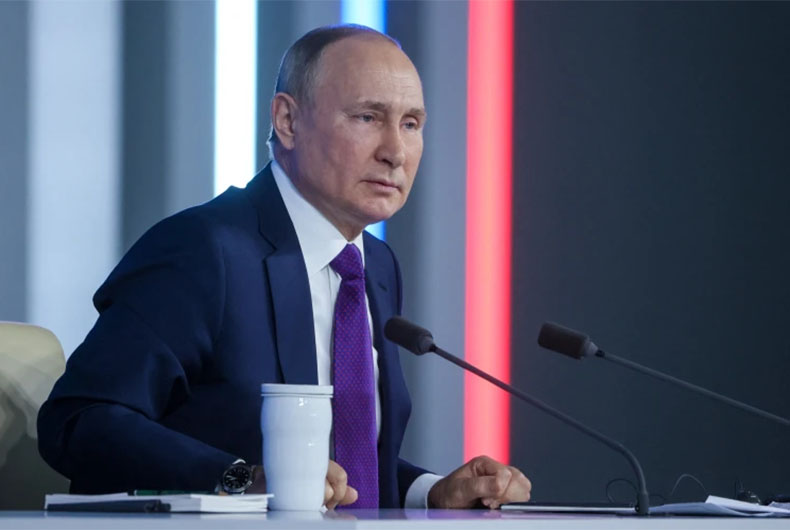 Russia has demanded for a new security arrangement in Europe, and threatened war if the US and its NATO allies fail to comply

Russia has demanded for a new security arrangement in Europe, and threatened war if the US and its NATO allies fail to comply. Western analysts are split over interpreting Russian President Vladimir Putin’s motives. Some say he is using the impossible list of demands as a pretext to invade Ukraine. Others think he is playing a weak hand to try to divide the West and reorder Europe’s security architecture in Russia’s favour.

The Russian Foreign Ministry, asking the US to remove its nuclear umbrella from Europe and allow Russia to re-establish its Soviet-era sphere of influence over Eastern Europe, issued the new Russian demands, in a rather unusual manner.

On December 17, 2021, the Russian Foreign Ministry unilaterally published two draft treaties: one focussing on Russia and the US, and the other between Russia and NATO.

Russia’s draft “Treaty between the United States of America and the Russian Federation on Security Guarantees” listed more than a dozen demands, including: no NATO membership to all states of the former USSR, including the Baltic states which have been members of the alliance since 2004, it prohibits NATO to expand further eastward, Further, the US can’t fly bombers or deploy warships, armed forces or armaments, in areas outside of its national airspace and national territorial waters, including within the framework of NATO respectively, such deployment could be perceived by Russia as a threat to its national security. It asks the US to remove all its nuclear weapons from Europe, and halt deploying ground-launched intermediate-range and shorter-range missiles outside of its territory.

The draft focussing on NATO “Agreement on Measures to Ensure the Security of the Russian Federation and Member States of the North Atlantic Treaty Organization” put forward additional demands, such as; NATO member states are prohibited from deploying military forces to any country that became a member of the alliance after May 27, 1997, when NATO and Russia signed the Founding Act on Mutual Relations. NATO is also prohibited from deploying land-based intermediate- and short-range missiles to a location from where such missiles can reach Russia, NATO is prohibited from any further enlargement including military cooperation with Ukraine as well as other states in Eastern Europe, the South Caucasus and in Central Asia.

Russian Deputy Foreign Minister Sergei Ryabkov declared that both texts are part of a whole and are not to be understood as being “a menu, where you can choose one or the other”.

While Russia expects NATO and the US to comply with its demands, Moscow, in return, has offered only a vague commitment to “not create conditions or situations that threaten the national security of the other parties”. The draft treaty imposes no requirements for Moscow to redeploy Russian forces.

On December 23, 2021, Putin, during a four-hour press conference, repeated his stance that “any further NATO movement to the east is unacceptable”. A few days later, the Kremlin described NATO expansion as “a matter of life and death” for Russia. On December 26, Russia warned Finland and Sweden against joining NATO.

Initially there was no response from either the US or NATO, as both said that they have scheduled meetings with Russian leaders in the second week of January, and it would give them a chance to parley before making their stand clear.

The Geneva talks between Russia and the US were followed by other sessions in Brussels with NATO and Vienna with Organisation for Security and Cooperation in Europe (OSCE) delegates, aimed at averting a crisis. But at all three meetings there were no sign of progress from either side.

While both sides dug in on their positions with Ukraine’s future hanging in the balance, Russian Deputy Foreign Minister Sergei Ryabkov said “no progress” was made on the central demand on NATO expansion.

Meanwhile, Michael Carpenter, the US ambassador to the OSCE, has said that Washington and its allies are supporting on-going dialogue to temper down tensions with Russia. He further said, we’re facing a crisis in European security. The drumbeat of war is sounding loud, and the rhetoric has gotten rather shrill.

This came as Russia said that the talks with the West over the situation in Ukraine have hit a “dead end”.

Recently, Moscow has been especially unsettled by the prospect of Ukraine being admitted to NATO and has warned of serious measures to counteract that scenario.

It seems that Putin’s obsession with Ukraine is due to both strategic and historical factors. The Russian–Ukrainian ties date back to even before the emergence of Soviet Union — and even before the days of the Russian empire beginning in the 18th century, which was the birthplace of the first Russian state in the 9th Century.

Further Putin wants to stem his country’s decline in global influence. Moscow’s leverage in places like Ukraine is one way to preserve that influence. Ukraine is also a key component of Russia’s plans for a Eurasian customs union with some other former Soviet states.

Ukraine’s move toward the Western bloc in the name of having a democratic state has made the Russian establishment feel betrayed because Kiev’s national identity and history is much more linked to Russia than Turkic states in Central Asia and Baltic states in eastern Europe, which were also part of the USSR.

The emotional presence of Kiev in the Russian heart has not changed much. Putin has continued to call Ukraine “Little Russia”, quoting a former Russian general, Anton Denikin.

Russia influence has significantly decreased over time across the Balkans, where Moscow was once the leading power. It has already lost Baltic states to the EU after the Soviet fall. As a result, Moscow feels that it can’t concede Ukraine to the West.

Moreover, Russia may not like to have too many pro-EU neighbours with NATO sympathies along its western border. Lithuania and Estonia, the two Baltic states neighbouring Russia, already joined the union much to the dismay of the Russian establishment. So it would do everything in order to maintain its influence over Ukraine. There is little doubt any more that Vladimir Putin is seeking nothing less than a transformation in European security, with a much-reduced NATO presence along its borders.