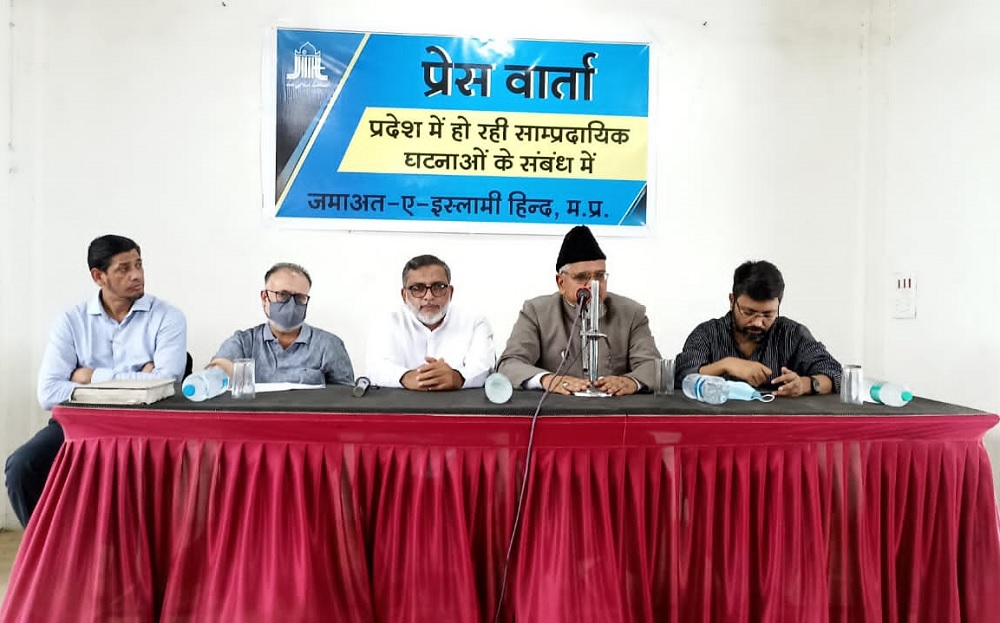 BHOPAL: Muslim victims of hate and those seeking justice for them in Madhya Pradesh are being penalised and booked under stringent laws than the perpetrators of such crimes who indulge in lynching, thrashing and beating though unprovoked in any manner.

A number of such recent incidents in the Malwa region of Madhya Pradesh comprising districts of Ujjain, Indore and Mandsaur bear testimony to these facts wherein the accused have in some cases have been let off on bail soon after arrests as the sections of IPC under which they were booked were not stringent enough and allowed bail easily. According to police, the Malwa region has recorded 12 incidents of communal tension since September 2020. In the last week of December 2020, a chain of incidents of communal violence took place in the Malwa region of Ujjain, Mandsaur, and Indore during the Ayodhya Ram Temple fund-raising rally.

A four-member fact-finding team of Jamaat-e-Islami Hind from Headquarters New Delhi had recently visited Ujjain and Indore to meet family members of victims of mob lynching to console and assure all legal help to them They also met senior police officials and public representatives to express their concern over rising cases of hate crimes.

Addressing a joint Press conference here the four-member team of Jamaat-e-Islami Hind said a sharp rise in communal incidents in Madhya Pradesh, especially in the Malwa region, is a matter of concern and state government should take measures to control it.

“In Ujjain, police arrested 14 people before forensic investigation of video of Moharram function. How will police ascertain who shouted slogans? What if only 4 raised slogans and other 10 were jailed without confirming,” said national vice president of Jamaat-e-Islami Hind, Engineer Mohammad Saleem.

About 50 km away from Madhidpur of Ujjain district, in Ujjain city, nearly 14 people of the Muslim community were booked after a video of Moharram procession went viral wherein allegedly pro-Pakistan were raised. The police claimed that anti-national slogans were raised at the event and the accused were booked on charges of sedition and NSA has been invoked against four of the accused.

However, social activist Nadeem Khan, who was part of the fact-finding team, charged that actually the video of Moharram procession was doctored with anti-national slogans to discredit Muslims.

Engineer Saleem said police had no answers to their queries. He alleged that the accused have political patronage and as such are fearless of any strict action being taken against them after indulging in such hate crimes. A trend of clear biased approach and discrimination by police and administration can be observed in the recent incidents, he claimed.

Talking to media, JIH national general secretary Malik Moattasim said every citizen has right to security and justice. But in recent incidents, it was found that the victims were sent to jail on complaints that were not verified while the accused were booked in less severe sections and were let off. “Such police actions embolden elements leading to more such incidents which would be a dangerous trend for democracy in the country,” he added.

His family and neighbours have strongly denied the accusation. They said it was inconceivable that the father of five would do something like that. It was an after-thought act that a complaint was lodged by the daughter when the video of Tasleem became viral and hue and cry was raised by Muslims against his thrashing. The irony is that police also booked over 28 Muslims, who had gathered outside the police station demanding justice for Tasleem, under stringent sections. Of the 28, six have been served with externment notice.

Zahid Khan, (45), a street vendor and a resident of Dewas Hathpipaliya was allegedly assaulted and looted on August 25 by Harjeet Singh (35) and Chatar Singh (40) after he failed to show his Aadhaar card to them. The accused were later identified as residents of Indore, and were booked under section 34, 294, 323 and 506 of the IPC were granted bail hours after the arrest by Dewas police. While three days after the Dewas incident, a Muslim scrap dealer, Abdul Rasheed, a resident of Mahidpur town of Ujjain district was allegedly threatened and forced to chant “Jai Shri Ram” by two men in a village where he had gone to collect scrap. Following the incident, the police arrested the accused duo. The matter came to light after two videos of the incident went viral.

Muslim organisations have alleged that BJP’s “hardcore Hindutva” agenda is at play, with mostly Muslims being charged with NSA. Hindu organisations have claimed the Social Democratic Party of India, (SDPI), and the Popular Front of India, (PFI), are stoking tensions. However, the allegations of involvement of SDPI and PFI were brushed aside by the state DGP Vivek Johri two days after the matter came to light. “There is no connection of SDPI and PFI with the Indore incident,” he told reporters in Bhopal.

Dr. Ishrat Ali, Shahar-e-Qazi, Indore, countered by saying: “The inflammatory speeches of the leaders of ruling party are adding fuel to the fire of these incidents which is a new trend in the State. Besides, in-activeness of police further deteriorates the situation.”

Meanwhile, political observers believe that the BJP, which had lost its ground in the 2018 election in the Malwa region, is trying to win it back by following the UP Model for the local body elections. The BJP, which won 56 out of 66 seats in Malwa Nimar region in 2013 Assembly elections, lost 28 seats to the Congress in 2018, which marked the end of Shivraj Singh Chouhan’s 13-year-old rule.

Veteran journalist and social worker L. S. Hardenia has said: “BJP leaders in state are trying to win the next assembly election by promoting Hindutva.

War of words between Cong & BJP

Even as three videos went viral across social media in the course of two days attracting a lot of censure from users across the country, a political war of words emerged in the state.

Rajya Sabha member and Madhya Pradesh ex-chief minister Digvijaya Singh posted multiple tweets on the incidents likening the incidents in MP to Talibani culture. He also questioned the role of the Chief Minister Shivraj Singh Chouhan and said it was he who was protecting the criminals and if it was not so, he (the CM) would have sought the resignation of Home Minister Narottam Mishra already.

Singh further said: “When BJP people show the audacity to upload the videos of lynching of people of a particular community in Talibani manner on social media, it sends out a message that the government is ours and we will not be harmed. And that is what happens. The ones who are beaten up are themselves turned into accused.”

Medical Education Minister Vishvas Sarang, who is also a government spokesman, said that the government is taking immediate cognizance and police are taking action in all these incidents, but one of the points of investigation is also whether the flurry of such videos was a Congress conspiracy. Talking to media persons, he said that it has to be probed whether the videos were fabricated or the incidents were pre-planned to defame the government and the majority community.

Retorting, Congress spokesman Narendra Saluja said that the minister was asking why the videos of the incidents were coming to Congress first. “Government is yours, police is yours, you are the minister and if the videos are coming to Congress first, you have no right to remain on your post. Anyway, the videos are being released on social media by the perpetrators of the incidents themselves with the aim to create an environment of fear and terror.

previousThe Wealth Gap Has Gone Sky High in the U.S.