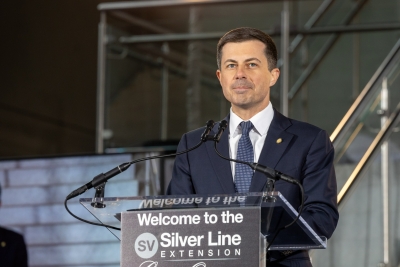 The US government has fined Air India $1.4 million for “extreme delays” in refunding passengers $121.5 million for flights cancelled or changed significantly.

Announcing the action against the Indian flag carrier and five other airlines on Monday, Transportation Secretary Pete Buttigieg said: “A flight cancellation is frustrating enough, and you shouldn’t also have to haggle or wait months to get your refund.”

If passengers don’t get refunds promptly for cancelled flights, “we will act to hold airlines accountable on behalf of American travellers and get passengers their money back”, he warned.

The Department of Transportation (DOT) said that the six airlines together were made to return nearly half a billion dollars to affected passengers and it collected fines totalling about $7.25 million.

Some of the flight disruptions appeared to be linked to the Covid pandemic when international travel was curtailed by border closings and health restrictions.

India stopped international flights in March 2020 and resumed scheduled flights without restrictions only in March this year after having permitted limited flights to only some destinations.

“Since the beginning of the Covid-19 pandemic, DOT has received a flood of complaints from air travellers about airlines’ failures to provide timely refunds after they had their flights cancelled or significantly changed,” the Department said.

DOT said that most of the fines will be paid directly to the US government and the remaining portion will be given to the passengers in addition to the refunds.

US law requires airlines to make cash refunds to passengers whose flights to or from America have been cancelled or changed significantly and they refuse to accept alternatives.

Airlines are also forbidden to force affected passengers to accept vouchers instead of cash refunds.

In Monday’s announcement, Frontier was the only US airline fined and was assessed the most, $2.2 million.

The other airlines were TAP Portugal, AeroMexico, El Al of Israel and Avianca of Colombia.