by Shaheryar Hossain for Maeeshat

While Syed Zafar Mahmood, a former civil servant, has been running the Sir Syed Coaching and Guidance Centre under the parent organisation ZFI, 28 students from his centre qualified UPSC exam this year.

“During its 10 years journey, ZFI has helped many students crack the country’s most prestigious exam. 28 candidates from our institute cracked this year’s UPSC. Two candidates are from 2015 ZFI batch,” said Mahmood on the sidelines of the felicitation ceremony, held in collaboration with Interfaith Coalition for Peace, at a hotel in New Friend’s Colony. 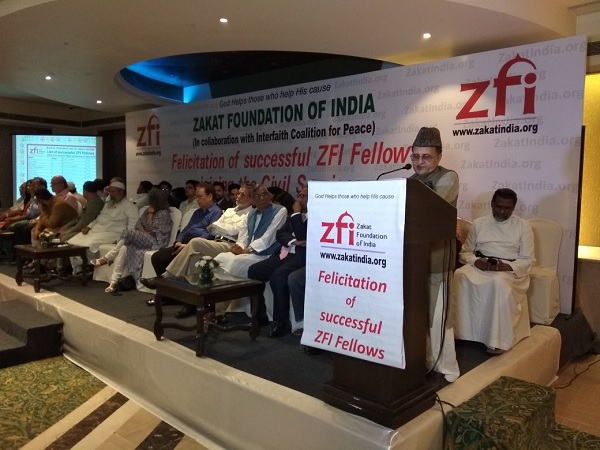 ZFI initially engaged in activities such as running an orphanage and helping the needy students. However, the coaching programme began in 2007.

“I am thankful to ZFI for supporting me. I want to give the credit to ZFI, Jamia Milia and Hamadard for my success. I didn’t clear the exam the first time. But I didn’t give up. I attempted again,” said Inabat Khaliq, ZFI fellow who qualified UPSC this year.

The Kashmiri girl secured 370th rank in the merit list. She had qualified the UPSC exam 2016 as well but secured a lower rank.

The foundation launched Sir Syed Coaching and Guidance Centre in 2007.

Every year, 35-40 candidates between the age of 22 and 27 are shortlisted for the fellowship.

Shortlisted candidates from Muslim and Christian communities are coached at various institutes and are accommodated in three boys hostels and a girls hostel in Mukherjee Nagar.

Of the 51 Muslim candidates who cracked this year’s UPSC exam, 28 are from the ZFI.

The students were given certificates.

A total of 990 candidates — 750 men and 240 women — have been recommended by the UPSC for appointment to various central government services.

previous92% RTIs filed with Delhi government online in past 10 months