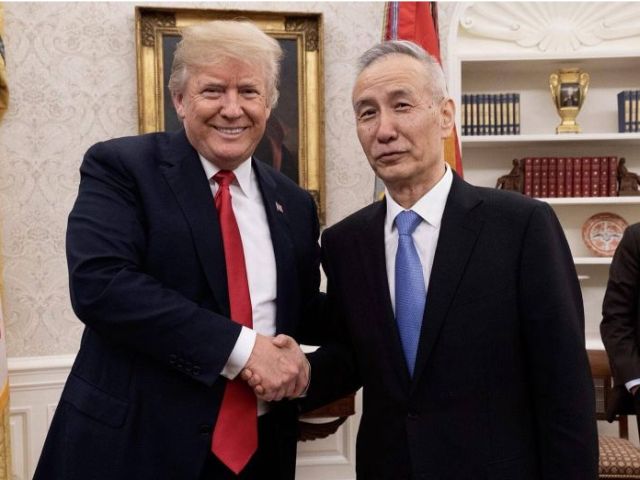 Washington : US President Donald Trump and Chinese Vice Premier Liu He expressed optimism that the two countries would reach a trade agreement and defuse a dispute between the world’s two largest economies, as both sides agreed to continue their negotiations for two more days.

“I would say that it’s more likely that a deal will happen,” Trump told the media on Friday at the White House.

“The fact that they’re willing to stay for quite a bit longer period, doubling up the time, that means something,” Trump said, adding: “I think there’s a good chance that it happens.”

Speaking through an interpreter, Liu, China’s top trade negotiator, said: “We believe that it is very likely that it will happen. And we hope that ultimately we will have a deal.”

Liu has been granted authority to negotiate directly with the US by Chinese President Xi Jinping, the Voice of America (VOA) news reported.

Liu also brought a letter from Xi where the President thaned Trump for the “lovely video” the Trumps’ grandchildren made for Xi and his wife to mark the Chinese Lunar New Year.

US Treasury Secretary Steven Mnuchin confirmed that talks have been extended through Sunday.

Trump also appeared to ease on his threat to more than double tariffs on $200 billion worth of Chinese goods if no deal is achieved by the March 1 deadline which was agreed by the two leaders during a December 1 meeting in Buenos Aires.

“You can tell this to President Xi,” Trump said to Liu. “If I see progress being made, substantial progress being made, it would not be inappropriate to extend that deadline, keep it at 10 per cent instead of raising it to 25 per cent. And I would be inclined to doing that.”

The US is calling on China to make structural changes on key issues such as stopping the theft of American technology and reining in improper subsidies and other advantages provided to state-owned companies.

Trump said he expected to meet Xi to work out the finer points of the deal. “Probably in Mar-a-Lago, probably fairly soon.”

The two countries imposed more than $360 billion in tariffs in two-way trade last year, after Trump triggered the trade dispute over complaints of unfair trade practices, the VOA reported.

The tariffs have weighed heavily on both countries’ manufacturing sectors and raised concern they could exacerbate the global economic slowdown.

In Friday’s meeting, Mnuchin told Trump that “currency manipulation”, a significant sticking point in the trade talks, had been resolved.

“We’ve actually concluded and reached an agreement, one of the strongest agreements ever on currency, but we have a lot of work to do over the next two days,” Mnuchin said.

Details of the currency deal or any other part of the agreement have not yet been released.

This week’s round of talks in Washington was originally scheduled to last two days.

In pursuit of an accord, China has already adopted several goodwill measures, such as lowering tariffs on imported vehicles from the US, resuming soy purchases from the US and introducing an initiative that would prohibit forced technology transfer from American countries doing business in the Asian nation.