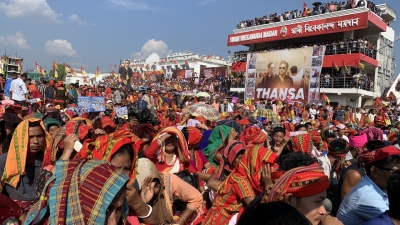 Months ahead of the Assembly polls in Tripura, a mega rally of the influential tribal based party — Tipraha Indigenous Progressive Regional Alliance (TIPRA) — in Agartala on Saturday is expected to have a significant impact in the political arena in the BJP-ruled state.

Agartala, Nov 12,2022:  Months ahead of the Assembly polls in Tripura, a mega rally of the influential tribal based party — Tipraha Indigenous Progressive Regional Alliance (TIPRA) — in Agartala on Saturday is expected to have a significant impact in the political arena in the BJP-ruled state.

All the leaders of TIPRA, headed by former royal scion Pradyot Bikram Manikya Deb Barman, in their speeches severely criticised the Bharatiya Janata Party (BJP) and the opposition Communist Party of India-Marxist (CPI-M) “for keeping the state’s 13 lakh tribals backward and poor”.

An emotionally-charged Deb Barman said that he would die fighting the rights of tribals but “would not be purchased by any party”.

Saying that in the February (2023) Assembly polls would be “one last fight”, he claimed that there is no law and order in Tripura and democracy is shattered in the state.

“Land rights to all tribal households would be given. I will not compromise for the rights and protection of the tribals,” the TIPRA supremo said and urged the tribals to fight unitedly to achieve their mission to snatch all rights and privileges.

He alleged that the BJP before the 2018 Assembly polls had given false promises of jobs and told the youths that if they give a miss-call from their mobile phone, they would get a government job.

The Deputy Chief Executive Member of the Tripura Tribal Areas Autonomous District Council (TTAADC) Animesh Debbarma said that the BJP government is not giving due funds to the autonomous body for the all round development of the tribals.

“The CPI-M promised to introduce the Inner Line Permit to protect the indigenous people but the Left party did not fulfill its promise despite having governed the state for 35 years.

“During the Noakhali riot (in 1946), tribals sheltered Bengalis in Tripura. Tribals are not communal. We want more power and more funding for the TTAADC,” Debbarma said.

Referring to TIPRA’s ‘Greater Tipraland’ demand, the tribal leader said that this demand was not aiming to harm Bengalis or any other non-tribal communities.

India’s ace footballer and chief of a Sikkim’s local political party Bhaichung Bhutia also addressed the rally and said that only the regional party can fulfill the hopes and aspirations of the indigenous people.

Mevar Kumar Jamatia had been the Forest and Tribal Welfare Minister in the BJP-IPFT government.

The TIPRA defeating the BJP, CPI-M and the Congress last year wrested the power of politically-important TTAADC, which has a jurisdiction on over two-thirds of Tripura’s 10,491 sq. km. area and is home to over 12,16,000 people, of which around 84 per cent are tribals, making the 30-member autonomous body as the mini-assembly after the 60-member Tripura assembly.

With the merger of the Indigenous Nationalist Party of Tripura (INPT), one of the state’s oldest tribal based parties, last year with TIPRA, the latter gained further political strength to take on the other local and national parties.

With the capture of the TTAADC and after a series of political developments since last year in favour of TIPRA, the tribal based party became the fourth largest political force after the Left, Congress and the BJP in Tripura.