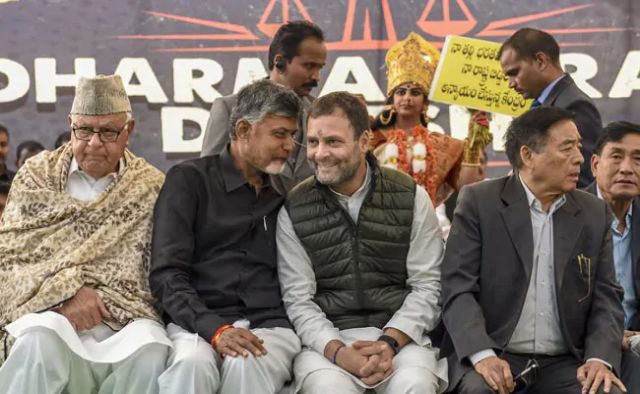 New Delhi : Charging the Centre with betrayal by not granting special status to Andhra Pradesh, Chief Minister N. Chandrababu Naidu on Monday claimed there is a threat to democracy and the country under the Narendra Modi-led BJP regime.

With a host of opposition leaders, including Congress President Rahul Gandhi and Delhi Chief Minister Arvind Kejriwal extending their support, the Telugu Desam Party (TDP) President sat on the fast in the national capital demanding the Centre to accord Special Category Status and fulfil other commitments made in the Andhra Pradesh Reorganisation Act, 2014.

A day after Modi addressed a rally in Andhra Pradesh and made a bitter attack on Naidu, a number of opposition leaders turned up at the Andhra Bhavan here and launched a scathing attack on the Prime Minister.

Pointing to the issue being repeatedly raised in Parliament by the TDP, Naidu said his agitation was a way to communicate to the nation “the betrayal by the Modi government of Andhra Pradesh”.

“Modi is threatening everybody — the opposition, bureaucracy, corporates and even the media. He is using the CBI, ED and the IT Department to crush the opposition and dissent,” said Naidu claiming democracy and the nation was “under threat” under Modi.

“We want to save democracy. Today there is a democratic compulsion for all political parties to join together to save the country,” he said.

Calling upon the opposition parties to unite, Naidu said: “We need to keep this in mind. Modi was given absolute majority. What did he do? Nothing. The BJP and Modi were playing games to divide the opposition by asking who’s their leader.

“He is responsible for the falling standard of public discourse. PM must stop first hitting below the belt. Then everyone will stop and then we will maintain dignity and discourse of politics.”

Naidu said his protest was against the injustice done to the state, to remind the Centre of its promises and to demonstrate the strength of Andhra Pradesh.

Warning the Prime Minister to stop the attacks, Naidu said he should act immediately to fulfil the commitments as only “two days were left” to the ongoing Parliament session, which could be the last session before the Lok Sabha elections.

“If you don’t fulfil the promises you have made, we know how to get it done,” he said, adding that the Centre failed to implement the provisions of Bifurcation Act, including funds to bridge the revenue deficit, railway zone in Visakhapatnam, steel plant in Kadapa and a petrochemical corridor.

nextNGMA was perfect platform to raise the questions that I did: Amol Palekar