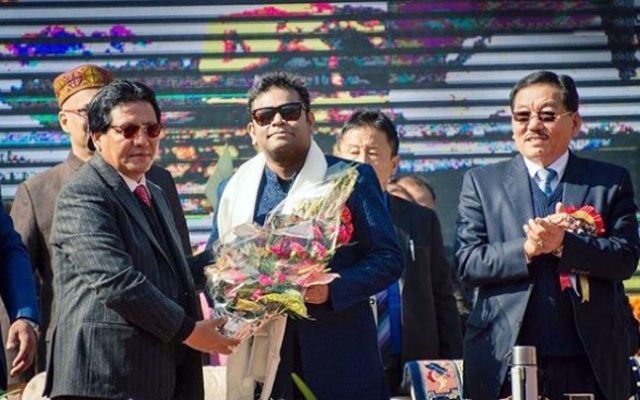 New Delhi : Oscar-winning composer A.R. Rahman, who has been named as the first brand ambassador of Sikkim, hopes India becomes more inclusive towards the “fascinating” Northeast, which he feels is a treasure waiting to be explored.

“I always find the Northeast region fascinating. It is a part of India that we were not exposed to that much. In this move (appointment as brand ambassador), there is an opportunity for doing this. I think we should be more inclusive of the Northeast,” Rahman told IANS in an interview on the phone from Gangtok.

“For the past seven years, I have been saying that I have met some amazing musicians from the Northeast. I met Shillong Chamber Choir, which now has become popular and we can see them perform at several places. It is important to make them feel that they are a part of India.”

Rahman on Monday was officially announced the first brand ambassador of Sikkim at the onset of ‘The Red Panda Winter Carnival 2018′, which aims at increasing the flow of tourists by promoting the state’s bounty.

Talking to IANS after wrapping up the event, Rahman opened up about the “inspirational” move, and his future plans.

“Things like these inspire the whole nation. There is so much to take from here, from the people and from the land. How they make their life very self-sustaining, and are environmentally conscious of maintaining the gift of nature that God has given. They have done it beautifully.”

The Grammy winning Indian musician says he will chalk out a detailed plan to promote the state soon.

“It is more of an inspirational role because the officials said that both of us should keep the expectations very low. (We are looking at) cultural exchange and find spots through which we can expose Sikkim to the world. It is such a beautiful place. The world needs to be told about Sikkim, even though they know about it.”

How does he plan to work towards it?

“We are going to discuss it. We are in early stages of it.”

Rahman started his journey in the film industry with “Roja” in 1992, and went on to establish his signature of fusing various musical elements in his compositions which include classical and contemporary to very earthy sounds of nature. He has earned tags like “music maestro” and “Mozart of Madras”.

For 2018, Rahman’s work slate is full, and he is looking forward to challenging himself by entering new zones.

“’99 Songs’ — my first film as a producer and a writer and directed by Vishwesh Krishnamoorthy — will be releasing this year… There are other movies like ‘2.0’, and another couple of Tamil movies as well as some surprises (in the year). I am excited about all of it.”

“We just released the cast clip. We are cutting the film and it is in post-production. Once we finish that, we will start releasing the songs one by one.”

What about his next international film?

“Ahhh… Yes (there is). But I can’t reveal anything. Maybe by the year-end, you will know something.”

(Sugandha Rawal can be contacted at sugandha.r@ians.in)

next'There is continuity between home and school for Muslim girls'