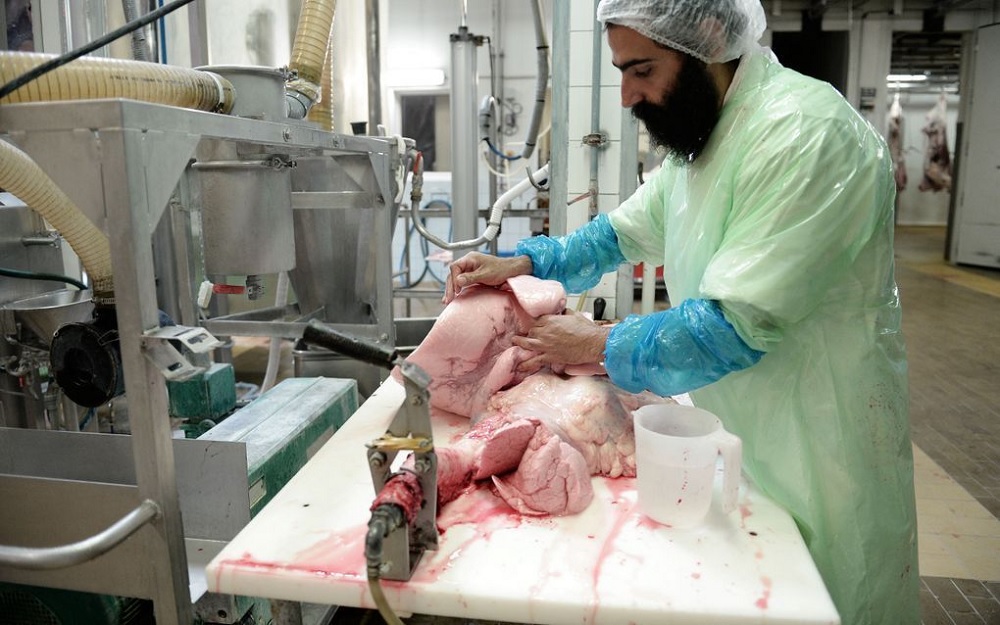 A man checks the lungs of a bovine animal after a Kosher ritual slaughter, in Haguenau, eastern France.

The new rules for religious slaughter in the Netherlands are good for animal welfare. The agreement between the Dutch government and the Jewish and Muslim community about slaughter without stunning, is functioning well.

This is the conclusion of Carola Schouten, Minister of Agriculture, Nature and Food Quality (LNV), based on Deloitte Consulting and Wageningen University research.

The minister is satisfied with the implementation and supervision of ritual slaughter. There are also no signs that more animals are being slaughtered without anaesthesia than is necessary for the Dutch market, she writes in a letter sent to the House of Representatives on Monday.

The study is the first evaluation of agreements from 2017 between the Dutch government, slaughterhouses, the Dutch-Israelite Church Association (NIK) and the Contact Body ‘Muslims and Government’. In addition to an earlier agreement from 2012, it was then stipulated, among other things, that an animal that is still not unconscious 40 seconds after the neck cut has been made must still be sedated. Furthermore, no animals are ritually slaughtered to export the meat.

The standards for ritual slaughter without stunning have been laid down by law with effect from January 1st, 2018. In addition, the agreements are evaluated every three years.

Deloitte concludes in its report that the covenant functions well and recommends continuing the agreements made. Compared to a baseline measurement from 2014, there is an improvement in animal welfare.

Ruben Vis, general secretary of the NIK, is satisfied with the evaluation results. “It is important for the Jewish community to continue to eat kosher meat. We are counting on the covenant to be continued. That suits a reliable government and is good for animal welfare.”

Ritual slaughter may only take place under the supervision of a veterinarian of the Dutch Food and Consumer Product Safety Authority (NVWA). Schouten’s letter suggests that some veterinarians object to performing this task. The NVWA overcomes this problem by scheduling the refusers and replacing them with colleagues who have no problem attending slaughter without stunning.

The University of Wageningen has researched the kosher and halal meat trade. Most meat appears to go to kosher and Islamic butchers in the Netherlands. Parts of slaughtered animals that Dutch consumers do not eat may be exported. But the researchers do not indicate that animals are explicitly slaughtered for export.

Ritual slaughter entails more costs, including mandatory supervision. As a result, the meat is more expensive than ‘regular’ meat. Schouten, therefore, thinks that selling kosher and halal meat on the meat market is not commercially attractive. All in all, she concludes that no more animals are ritually slaughtered than what the Dutch Jewish and Muslim communities need.

The report of the Wageningen researchers shows that in 2020 64,400 cattle, sheep and goats were slaughtered without stunning in the Netherlands. That is 2.2 per cent of the nearly 3 million cows, sheep and goats slaughtered in that year. In most cases, it concerns sheep: 55,300 head.

Many sheep are slaughtered for the Islamic Feast of Sacrifice, but those animals are increasingly getting stunned. Of the 45,000 sheep and goats earmarked for that feast in 2020, 23,000 were slaughtered without stunning, or 51 per cent. In 2017 this was still 94 per cent.

This article is a translation of an article previously published in Dutch daily Reformatorisch Dagblad, on December 22nd, 2021

previousThe Turkish approach to boost its ties with African countries, could be copied by others also for a sustainable development of all.

nextIndia and Pakistan, 25 Years from Now