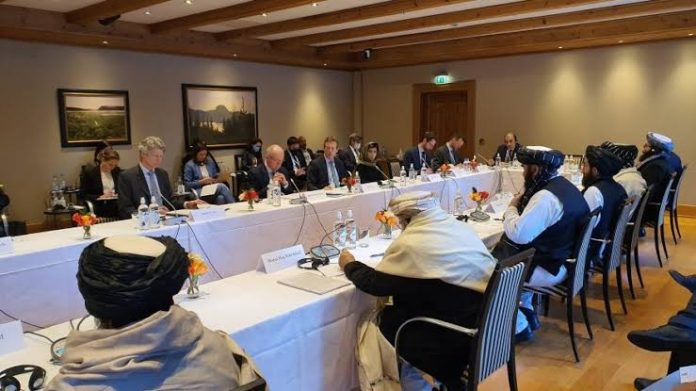 Oslo/Kabul: A visiting Taliban delegation and representatives of the US and seven other nations and region held talks in Oslo which mainly focused on Afghanistan’s economy, humanitarian aid to the war-torn country, security and healthcare, according to media reports.

According to the Taliban Foreign Ministry’s spokesman Abdul Qahar Balkhi, the meeting, set to last for three days, started on Monday and the remaining representatives were from the UK, Norway, Germany, Italy, France, Qatar and the European Union (EU).

In a tweet, Balkhi said: “The meeting focused on discussions on economy, humanitarian aid, security, central bank operation, health & other relevant issues. The discussions are in progress, full report will follow.”

A day before the meeting, the US special envoy for Afghanistan Thomas West on Sunday evening said that Washington and its allies were seeking ways to address the ongoing humanitarian crisis, reports TOLO News.

“As we seek to address (the) humanitarian crisis together with allies, partners, and relief organisations, we will continue clear-eyed diplomacy with the Taliban regarding our concerns and our abiding interest in a stable, rights-respecting and inclusive Afghanistan,” he said.

Political analysts believe that such meetings could play a vital role in solving the problems in the country.

“There is a need to take a constructive step inside Afghanistan for the formation of an inclusive and sustainable government,” said professor Sayed Baqir Mohseni.

Earlier on Sunday, the Taliban met with members of the civil society of Afghanistan, including women, and discussed the ongoing situation in Afghanistan.

The delegation, headed by acting Foreign Minister Amir Khan Muttaqi, landed in Norway on Saturday night. This is their first visit to Europe after the Taliban took over Afghanistan in August 2021.

Although the visit comes on an official invite by Norway, the government in Oslo has said it does not represent a legitimisation or recognition of the Taliban.