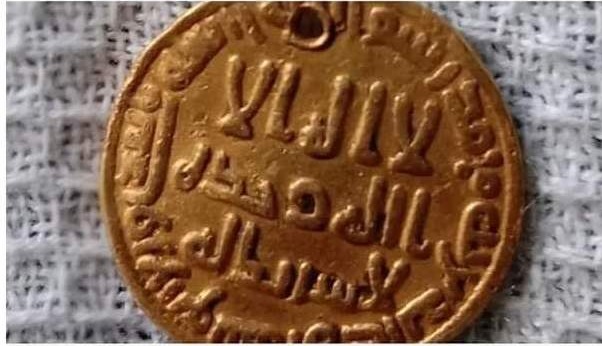 New Delhi:   Syrians gold coin inscribed “There is no God, but GOD”,   in Arabic  has  been unearthed at at Elandhakkarai near Kalaiyar Koil in Sivagangai district  where excavations are being carried out by the Tamil Nadu archaeology department.

According to the leading Tamil weekly magazine, ‘Anantha Vikatan’, the gold coin found during the excavation seems to be 6th century AH coins.  In Keezhadi, the outskirts of Madurai and border of Sivagangai district, now the 6th phase of excavation in going on, this was inaugurated by the state Chief Minister Edapadi Palanisami before lock down on February 19, 2020.  During the lockdown period the excavation work was halted which has been now started again.  Archeological activist Gemini Ramesh told the Tamil weekly that 6th Century Syrian Gold Coin was found under the earth at Elandhakkarai near Kalaiyar Koil, Sivagangai district of Tamil Nadu.  The unearthing of the gold coin shows the advent of Islam very early in Madurai area.

The Keeladi findings have led academics to describe the site as part of the Vaigai Valley Civilization. Evidences of civilization before 2300 years have been found here in Keezhadi few years back. That is why the excavation has been going on since 2015.

Mohamed Yusuff, Madurai resident who is lawyer by profession, told Muslim Mirror that Islam arrived in Madurai even before Malik Kafur’s invasion of Madurai in the 14th century. Quoting History professor R Venkataraman,   Yusuff said even before the advent of Islam, Arabs maintained trade links with South India, especially for the pearls Madurai Pandya Kingdom was famous for.

“Sufis, Muslim saints, started coming to Tamil Nadu by 900 AD. The entry of Islam to the region was peaceful as Sufis conceived God as love,” he said.

According to Venkataraman, the short-lived Madurai Sultanate and Islamic influence did have their impact on the city, especially on warfare and town planning.

“Muslim rulers introduced arch construction they learnt from the Romans. It changed the style of architecture here in a significant way.”

Yusuff further said that his home is situated at the river bank of Vaigai and the excavation sites his not far away from his locality. Meanwhile, the excavation work has been revived after the lockdown was lifted in the area. He hoped that many things related to Islam’s early presence would be uncovered during the excavation.

nextMaulana Mohammed Naseeruddin ,leader of Wahdat-e-Islami passes away in Hyderabad