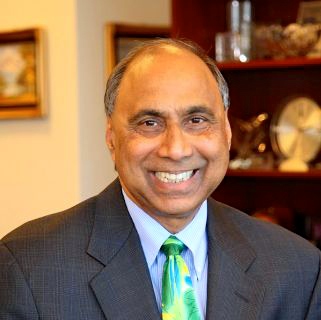 Frank F. Islam is a globally renowned entrepreneur, investor, civic leader and philanthropist. Islam’s personal journey from India to the US and his meteoric rise in the upper echelons of American business world, politics, and civil society is a inspiring story for South Asians in America.

In a Q & A with South Asia Monitor, the Washington-based, Islam talks to Akshat Singh, about his life journey, South Asian aspirations in the US, his love for philanthropy and his long term involvement with the Democratic Party and presidential candidate Joe Biden.

Excerpts from the interview:

Q: Yours is an amazing and inspiring life story – from Azamgarh, Uttar Pradesh to America. Briefly tell us your journey that got you there to pursue the American dream.

A: I was born in Azamgarh and spent the first few years of my life in Azamgarh.

My parents moved our family to Varanasi, a major cultural, spiritual, and industrial city on the banks of the river Ganges. I have a fond memory of this city. It is where my journey began. This city shaped my story. It is where I learned about the richness of religious diversity and respect for other religions. I firmly believe diversity makes us stronger and brings people together.

Then I went to Aligarh Muslim University (AMU). My days at AMU had a profound effect on me. It was an exciting part of my life but sometimes it was chaotic. But nevertheless, it was filled with charms, cheers, changes, and challenges; memory remains endearing.

While attending AMU, I met Wolfgang Thron, a visiting professor of Mathematics from the University of Colorado in Boulder, Colorado.  He convinced me that I should go to America to pursue expanded opportunities and get a cutting-edge education in the emerging field of computer science.

So, at the age of 15, I decided to leave my family and friends in India with just a few hundred dollars in my pocket. I went to Boulder, Colorado to get an education and to pursue the American dream.

I got my bachelor’s and master’s degrees in computer science from the University of Colorado. I always wanted to own my own business. But I did not come from a family that owned a business. I also had no personal experience or role model in business.

Therefore, I decided to do my apprenticeship and to learn the ropes by going to work in two large IT companies. It enabled me to develop the knowledge, skills, and abilities required to succeed in business.

With that experience, I felt ready to go out on my own and I acquired the QSS Group, an IT company in Washington, DC, in 1994 for $45,000. My wife Debbie and I had to mortgage our home to do that.

I must admit the first few years were not easy.  I worked 12-hour days seven days a week for little to no pay. My journey was not a straight line. Indeed, there were numerous twists and turns. What enabled me to prevail on the journey in myself and those around me and the opportunity presented by the American dream.

With the help of a wonderful management team that I recruited over time, we built the QSS Group from 1 employee – me – to more than 3,000 employees and approximately $300 million dollars in revenue.

The team of talented managers was central to everything. Success in business is a team sport. So, when people asked me how I became successful, it was not me but we who made it happen.

In 2007, after 13 years in business, I sold my company to Perot Systems.  That sale allowed me to establish a private foundation that supports educational, cultural, and artistic causes around the world including in India and in the United States. Now I am concentrating on community and social engagement and on philanthropic activities by sharing and giving back.

Q: You are one of the early Indian tech entrepreneurs in the US. What is the difference in the entrepreneurship climate between then and now? How have things changed for the new generation of Indians and South Asians in America?

A: The entrepreneurial climate in the US remains strong.  The biggest difference is that when I came here there were no dominant technology companies as the technology boom was in its infancy. Things have changed dramatically in that regard with the explosive development of firms like Microsoft, Google, Apple, Facebook, and Amazon.  Organizations such as these are integrating technology into their business models, securing advertising, and changing the nature of the business landscape forever.

Another big difference now is caused because of what is going on in the Silicon Valley in California and to a lesser extent in technology corridors across the country. The private sector is providing considerable investment capital to start-up technology companies and it is much easier to take a company public.

That said there is still a substantial opportunity for Indians and South Asians to make it big in America and to realize the American dream.  To do that, they need to make sure they have the right technical skills which can be acquired through both higher education and interning or doing an apprenticeship by working for an American company to participate in the Optional Practical Training program which allows college graduates to work for a private sector company for up to three years after graduating.

Then, these new Indian and South Asian entrepreneurs need to decide whether they want to work their way up the corporate ladder doing entrepreneurial things in a large business or go on their own and start their own business.

In spite of the current times, America remains a wonderful place to pursue one’s dreams. America is a land of opportunity. I strongly believe if you aim high and you work hard you can pursue the American dream.

Q: From entrepreneurship to philanthropy, that’s another phase of your journey. Can you talk about it?

A: Philanthropy is part II of my American journey. I am reminded and guided by the words of President John F. Kennedy who said: to whom much is given much is expected.

My philanthropy is targeted at having a social impact. I engage in what I call purposeful philanthropy.

Purposeful philanthropy is making investments directed at creating a difference in pivot point areas that matter to the future of society. The returns on those investments are changes to conditions and/or the creation of individuals who will become change agents to address those conditions.

There is a distinction between purposeful philanthropy and charity. The distinction is a critical one.

The pivot point areas – areas that can be leveraged and effectively addressed to effectuate change and achieve positive outcomes – for purposeful philanthropy are virtually endless. My personal priority philanthropic areas are education, arts and culture, world peace and civic learning and engagement.

I have chosen those areas because they are important to me and because I know that improvement in them can make a meaningful and substantial difference for others. Let me give you the short reasons for selecting them and tell you about some of my investments beginning with education.

Education is the bridge to the future and opportunity creator. Education is the gift that keeps on giving.  In the educational arena, I have supported many scholarships at colleges here in the United States. My most significant investment in India where my wife Debbie and I have dedicated the Frank and Debbie Islam Management Complex at Aligarh Muslim University and we also dedicated an auditorium there in our names in the Department of Mass Communications.

We are living in an increasingly dangerous world and turbulent times. World peace is essential for the future of this planet. Recognizing this, I have contributed a lot of money to support the US Institute for Peace and the Woodrow Wilson Center, both of which bring scholars and practitioners to develop programs to try to find peaceful means for conflict resolution.

The free press is one of the defining qualities of a healthy and vibrant and vital democracy and a means for promoting civic engagement. Recognizing this, my wife Debbie and I have supported Alfred Friendly Press Partners Scholarships to bring experienced journalists from India to work at a newspaper here and study at the University of Missouri School of Journalism.  We have also sponsored civic engagement champion awards in conjunction with the National Association of State Boards of Education that were given to middle school teachers

Q: You are now seen as a civic and thought leader, close to the Democratic Party establishment, one who is playing a significant role in the Joe Biden campaign for the presidency. How do you see things before the election?

A:I am cautiously optimistic.  All of the most recent national polls show Biden moving well ahead of Trump with a lead of anywhere from 10 to 15 percentage points.

More importantly, Biden is also polling ahead in six swing states that Trump would have to win to be re-elected in this election.  Those states are Arizona, Florida, Michigan, North Carolina, Pennsylvania and Wisconsin.  Trump won all those states in 2016.  It is highly unlikely that he will be able to do so this time around.  In fact, although it is not probable, he could lose them all.

That’s because Trump has what has been called the 50 percent problem.   A new NBC/Wall Street Journal poll shows that 50 percent of registered voters disapprove of the president and say there is no change that they will vote for him.  This compares to only 37 percent who say that they would never vote for Biden.

That 37 percent is about the size of Trump’s voting base.  That means that nearly all of the swing or independent voters who are not party loyalists would lean toward supporting Biden.

The polling signs are good. But polls don’t vote, people do.  There is still a way to go.  And, there is a lot that can happen before the votes are cast and then counted on November 3.

Trump understands this and that is why he and the Republicans are trying to limit new voter registration, minimize vote by mail and reduce the number of polling places to make it more difficult for Democrats to win.  And, as Joseph Stalin once said, “It’s not the people who vote that matter, what matters is who counts the votes.”

Some pundits have warned that Trump would not be above trying to manipulate the vote results.  Others have warned that, if Trump loses, he will say that the results were rigged and not step down.

We are truly living in chaotic and challenging times in the United States under this President who is the chaos creator.  He had divided this nation. He does not support our democratic values and its character and its conscious. He thinks he is above the rule of law and order.

The country needs an uniter and not a divider.  I am confident that Joe Biden will be that person as long as the voice of the American people is heard and the electoral process is allowed to play out fairly.

The interviewer is Research Associate, South Asia Monitor. He can be contacted at akshat.singh@spsindia.in