Expression of Interest of over Rs 15.42 lakh crore received in GIS in MP 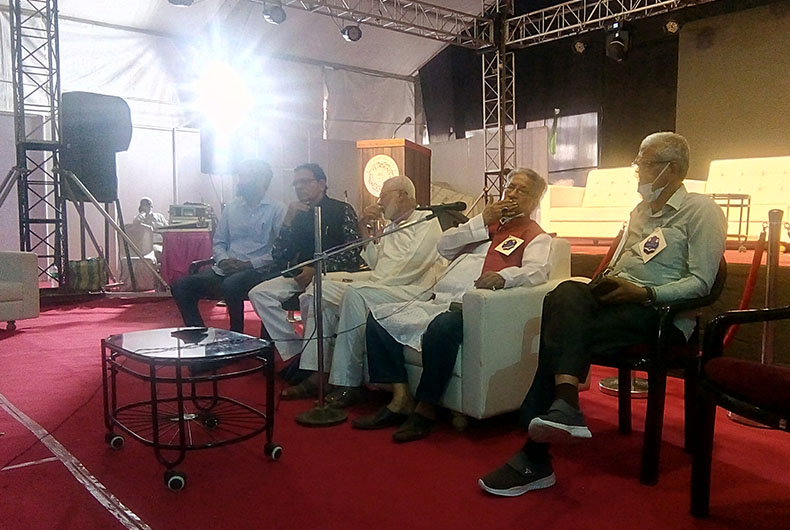 Malegaon: While heaping praise on Imran Khan, noted journalist Hasan Kamal while addressing a program held on the side-lines of Kul Hind Urdu Kitab Mela organised by the National Council for Promotion of Urdu Language (NCPUL) in Malegaon Saturday said the Pakistani Prime Minister is a “Statesman Material”.

“Politicians regularly use Urdu Shayari (poetry) and Urdu Ashaar (couplets) in rallies and different programs to attract and impress their supporters and audiences”, Hasan Kamal, himself a poet, lyricist and playwright, said. “However I heard Imran Khan reciting soon after taking oath as Prime Minister of Pakistan an Urdu couplet that was not of this type. It was also not one of those couplets that politicians use – without realising whether they suit the occasion or not. They just use them to score brownie points over their opponents and earn applauds from their audience”, he said.

“Not the selection of the couplet alone, it also perfectly suited the occasion”, Hasan Kamal recalled while addressing the Urdu Kitab Mela event of the NCPUL adding:

“It was then I realised that Imran Khan is a thinker and statesman material.”

Hasan Kamal debuted in the 1982 film “Nikaah“, directed by B. R. Chopra. It was also the comeback of prominent composer of the sixties Ravi and the debut of Salma Agha as both an actress and singer. Ravi approached Hasan Kamal to write the lyrics. Hasan wrote five songs for him. Out of them two – “Dil Ke Armaan” and “Dil Ki Yeh Arzoo Thi“, were super hit tracks.

Moving probably in the fag-end of his successful career, Hasan Kamal, now 80 year-old, while sharing with the audiences of Malegaon Urdu Kitab Mela 2021 his last wish, said he wants to write a book on Imran Khan.

“I have never personally met Imran Khan. Most of my knowledge about the Pakistani Prime Minister is limited to his cricketing career. But after listening to that speech I decided to write a book on him. It could be titled ‘Imran Khan as seen by an Indian Journalist’”, Hasan Kamal said at the NCPUL Urdu lit fest.

During the program, Hasan Kamal also shared glimpses of his long career – including how he was persuaded by the legendary Dilip Kumar to enact one of his own scenes in a film, and also how Maulana Mukhtar Ahmad Nadvi helped him, a “leftist and communist”, to return to the roots of Islam.