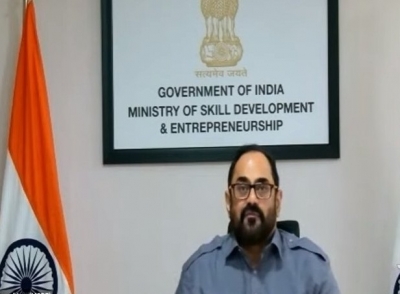 Digital India is catalysing India’s ‘Techade’ and startups and unicorns are the new drivers of the digital economy, Minister of State for Electronics and IT Rajeev Chandrasekhar said on Tuesday.

Ahmedabad, July 5 , 2022:  Digital India is catalysing India’s ‘Techade’ and startups and unicorns are the new drivers of the digital economy, Minister of State for Electronics and IT Rajeev Chandrasekhar said on Tuesday.

The ‘Digital India’ initiatives have brought in a seismic transformation in the economic landscape of the country, by creating more opportunities and putting the youth in the driver’s seat of the digital economy,” he said at the ‘StartUps Conference’ here.

Minister of Electronics and IT Ashwini Vaishnaw and several founders and co-founders of startups and unicorns were also present at the event.

Chandrasekhar, along with CEOs of 50 Indian startups and unicorns, recently met British Prime Minister Boris Johnson to discuss future collaborations and partnerships between India and the UK in the innovation and technology sector.

He also discussed achievements of ‘Digital India’ and sought future collaborations with the UK Prime Minister in the technology sector.