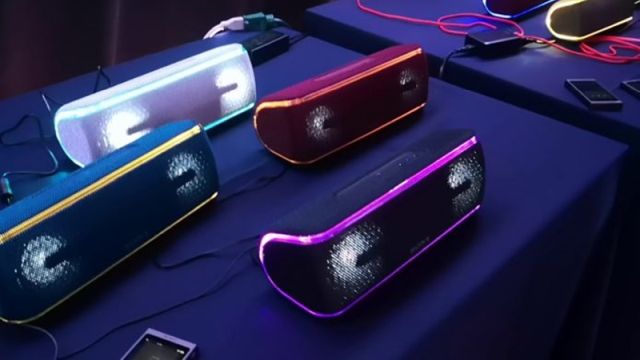 New Delhi : Sony which has a sizeable presence in the Indian audio market has introduced Sony SRS-XB41 Bluetooth speaker for music aficionados in the country.

The device, essentially a successor to last year’s XB40, has brought slight changes to its form factor.

At a first glance, the wireless speakers looked like it is built to perform and last. Here is our review of SRS-XB41.

The Rs 16,990 device sports a slightly bigger form factor that its predecessor XB40 and for good.

The basic controls lie at the top of the device which lets you connect it to a smartphone (via Bluetooth), as well as increase or decrease the volume.

A panel at the rear side of the device remains hidden under a flap, which lets you access the advanced controls.

Underneath the flap, you will find a DC input for charging the device, a Micro-USB input and a USB output to charge other devices as well.

The “WPC” button lets you connect more than one speaker together via Bluetooth.

When it comes to the design language, the Sony XB41 features a soft fabric lining on top of the speaker grilles. It covers almost all of the front fillet of the device.

With IP67 rating, Sony has now made the XB41 completely water resistant which makes it a perfect companion for a pool party (its predecessor was splash resistant only).

Another high point is “party lights” that came to life as soon as the device is switched on.

Similar to the previous iteration, the lighting pattern on the SRS-XB41 consists of an outer ring around the speaker grille with flashing LEDs on either ends of the speaker.

The 58-mm drivers, with their own LED lights, also lit up when we played music. The company has designed the lights to work in sync with the beats.

Listening to a song alone in a room, or if you wish to go out camping with friends on a weekend, this device won’t disappoint you.

The speakers performed well with ample battery back-up even on a windy day thanks to its size.

It is pertinent to say that the “Live Sound” feature — that involves the directional use of sound to emulate a surround sound experience — makes it a perfect fit for party enthusiasts.

Another key highlight is deep bass which is actually more than you would imagine.

What does not work?

Typically, those looking for a Bluetooth speaker would look for portability to some extent and this device does not fit the bill when it comes to that.

However, that does not mean you can not carry the speakers with you but doing that would definitely need some effort.

The quality of the microphone was poor and we faced issues while using the device for making or receiving calls.

Conclusion: Sony SRS-XB41 speakers would appeal to a specific breed of music listeners, especially electronic dance music (EDM) or house music fans. Nonetheless, you can try it for a completely different experience.