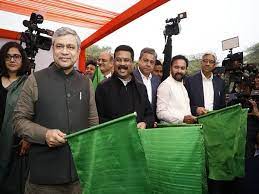 The Bharat Gaurav train started its journey with 528 tourists, and will cover some of the prominent pilgrimage and heritage destinations in Uttar Pradesh, Bihar, Jharkhand and Odisha.

Speaking on the occasion, Eductaion Minister Pradhan said that the train fulfils the Prime Minister’s vision to enable common citizens of the country to travel within India, particularly to the pilgrimage sites.

He said that high-quality facilities are being provided to the passengers, including accommodation, food and local transportation.

Such initiatives will not only provide opportunities to the people to be aware about the rich Indian cultural heritage, but also provide employment to many, Pradhan said.

Railway Minister Vaishnaw said that eight such pilgrim circuits have already become operational, giving an opportunity to the believers to expose themselves to Indian culture.

India has a very large number of tourist destinations, and the Prime Minister has been guiding his ministry to provide easy access, suitable amenities, and proper information to the people for tapping them properly, Vaishnaw said.

Reddy said that lakhs of Indians want to visit religious places but are not able to do so due to lack of convenience and affordability.

Today’s initiative, coinciding with the tourism day and voters’ day, will go a long way in promoting domestic tourism, particularly among the common people of the country, said the Tourism Minister.

The train embarked on its journey on the 8-day tour wherein tourists will visit the Jagannath temple in Puri, one among the Char Dhams of India.

Visits to Varanasi, Baidyanath Dham, Konark and Gaya are added attractions of the tour. The train will return to Delhi on February 1.

Freshly-cooked vegetarian meals will be served on board the train to the guests from the well-equipped modern pantry car.

The train has also been fitted with an infotainment system for the entertainment of the passengers as well as for public announcements.